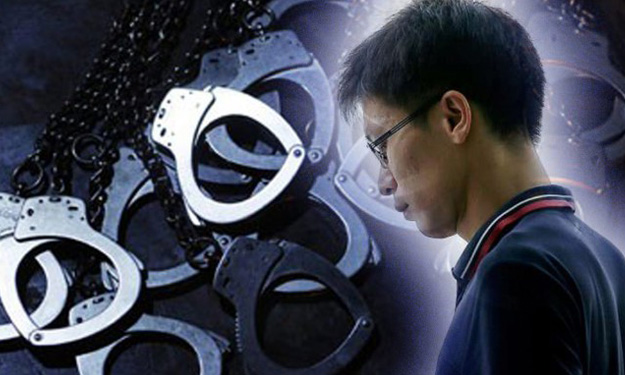 A 35-year-old former teacher, who sexually assaulted a 12-year-old girl two years ago, was yesterday jailed for 21 months.

Du Tao, a Singaporean, pleaded guilty to a charge of sexual penetration of a minor and a count of committing an indecent act with a child. He admitted to two other charges which were taken into consideration during sentencing.

The court heard that Du, who was then 33 and teaching Primary 3 pupils Chinese at a school in the north, had got to know the girl on online app Mei Pai, which allows users to share photographs.

The girl, who cannot be named, told Du that she was 13 and sent him photos of her in her primary school uniform.

She addressed him as "Daddy" while he called her "Nu Er" or daughter in Chinese.

Du's chats with the girl became explicitly lewd and he told her that he would teach her how to have sex.

On March 8, 2014, a week after Du got to know the girl, she invited him to her flat in Sengkang, as he had repeatedly told her that he wanted to visit her there.

While she was having her lunch there at about noon, he suddenly hugged her from behind. She stood up and turned around to face him and they started kissing.

Du led her to the bedroom and they continued to kiss on the bed before he sexually assaulted her and made her perform a sex act on him.

Shortly after, the police, responding to a tip-off, knocked on the door.

Deputy Public Prosecutor Selene Yap asked for 21 months' jail, noting that Du had kept in constant contact with the girl for a week before meeting her and had sent sexually suggestive messages.

In mitigation, Du's lawyer Jenny Lai said her client, who has a newborn son, has been unemployed for some time and had "a remarkable record in the teaching profession". She asked for 18 months' jail.

In passing sentence, District Judge Eddy Tham said there were multiple aggravating factors in the case which warranted a deterrent sentence.

He said that details of Du's messages revealed moral corruption. Du had also exploited the naivety of the young girl and preyed on her.

For sexual penetration of a minor, Du could have been jailed for 10 years and fined.

For committing an indecent act with a child, he could have been jailed for five years and fined $10,000.