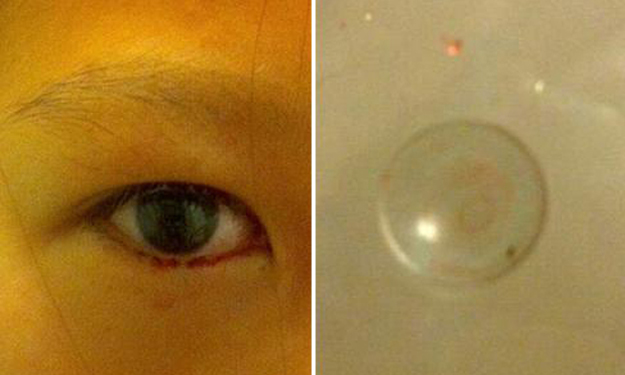 Eye doctors in Hong Kong who recently treated a young patient were shocked to find the cause of her blood-stained tears.

As they turned the 11-year-old girl's eyelid inside out during an eye examination, a hard contact lens flew out. It is believed that the lens was stuck inside her eyelid for about two years.

Prior to the eye checkup, the girl had mild swelling and inflammation in her upper right eyelid for two weeks, the Daily Mail reported.

A general practitioner prescribed her topical antibiotics for a case of chalazion - small bumps in eyelid caused by blocked duct - but the treatment did not help to alleviate her discomfort.

She found traces of blood in her tears instead, said Dr Sek Keung Kwok and Dr Tommy Chung Yan Chan in an online medical report.

Alarmed, her family sent her to an eye centre for help.

There, a CT scan of the girl's eyes revealed a lesion on her eyelid that had a hard edge and was also filled with fluid. This led doctors to believe that she had a cyst on her right eye.

After the discovery of the old lens, her mother recalled that she had lost a orthokeratology (Ortho-K) lens two years ago.

She had been wearing the lenses overnight to reshape her corneas and prevent her myopia (short-sightedness) from getting worse.

In their report, the doctors highlighted the challenge of diagnosing children with similar conditions as they may not be able to give a detailed history of a lost lens.

It is unclear what happened to the girl's sight.