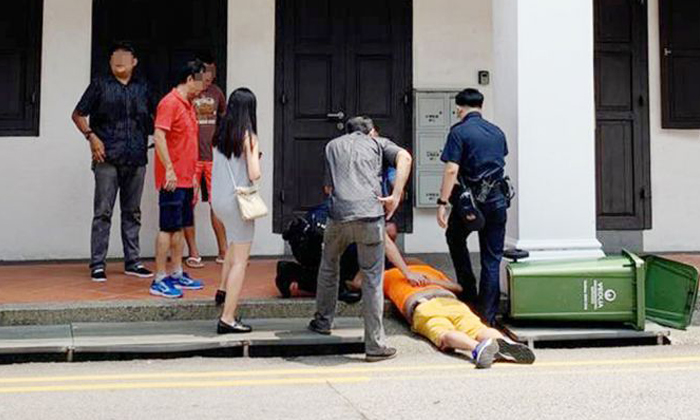 The Good Samaritans who chased and restrained a man for allegedly taking upskirt pictures in Little India last year had not used excessive force and his death was due to a "natural disease process", said State Coroner Kamala Ponnampalam.

But she added that it is preferred and safer for the police to handle such matters.

In an inquiry into Mr Andrew Ho Chee Meng's death, the state coroner said that following an autopsy, the 46-year-old Singaporean was found to have died from hypothyroid cardiomyopathy.

The Singapore General Hospital's website states that cardiomyopathy is a disease of the heart muscle.

A Health Sciences Authority forensic pathologist who conducted the autopsy said that Mr Ho had a history of hypothyroidism, which made the heart slow to recover from its contraction in time for the next one.

The doctor also felt that the stress of running while being chased and Mr Ho's subsequent restraint contributed to his death.

State Coroner Kamala said in her findings dated Sept 11 that public participation in crime prevention efforts is "necessary and ought to be encouraged".

She added: "It may be prudent, however, to promote reporting to police or seeking police assistance as the preferred and safer option."

She noted that the witnesses made no attempt to reposition Mr Ho or actively check that he was well even though he had vomited.

Video footage of the incident also showed that Mr Ho later stopped struggling and was lying motionless on the ground for about three minutes.

The witnesses, however, "either did not observe this or did not think that it was significant", said the state coroner.

She said that Mr Ho's unresponsive state was detected only after police officers arrived at the scene and one of them found that he did not have a pulse.

State Coroner Kamala said: "The witnesses were obviously unaware of the medical risks associated with methods of restraint or the need to continually monitor as a means of mitigating that risk.

"That said, it is noted that the witnesses did not behave in an overly aggressive manner with Mr Andrew or use excessive force to restrain him."

According to the findings, a man identified as Mr Ng Kim Tong was at the foot of an ascending escalator at Little India MRT station at around 12.40pm on Nov 1 last year when he spotted Mr Ho trying to snap upskirt pictures of a woman.

The trio managed to detain Mr Ho at a pavement in nearby Niven Road and he was lying face down on the ground when they restrained him. They held on to Mr Ho's limbs and Mr Nardozi took away his mobile phone. The police were alerted and the device was later found to contain 47 upskirt photographs.

Police arrived at the scene at 12.53pm and Mr Ho was found to be unresponsive when an officer tapped his shoulder. When police officers arrived at the scene, the man was motionless and had no pulse. PHOTO: ST READER

State Coroner Kamala said: "One of the men who had earlier restrained Mr Andrew remarked that Mr Andrew was putting on an act because the police were there."

The policeman checked for a pulse but could not detect one.

Related Stories
Man who allegedly took upskirt videos dies: I did not choke him to death, says guy who detained him
Man dies after getting detained by others for allegedly taking upskirt videos of woman near Little India
More About:
upskirt
dead
death
pervert
little india