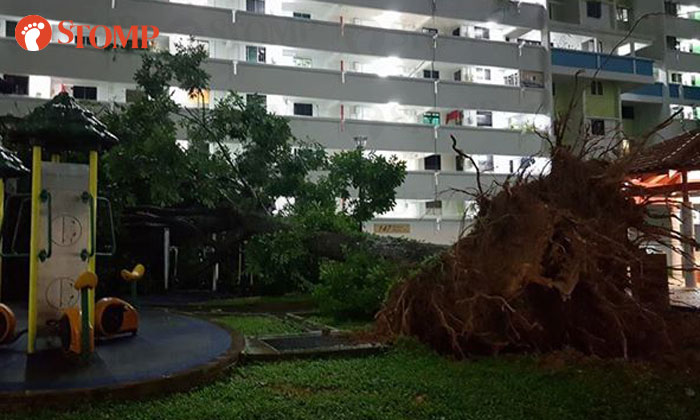 Stomper Lokesh and Kaviaaromal shared photos of the fallen tree with Stomp.

Lokesh was walking on his way home when his wife called him to tell him what had happened.

"She said that she heard a loud sound, like a building structure collapsing," said the Stomper.

"She then saw the tree had fallen on part of the playground."

When Lokesh returned home, he found leaves and branches from the tree scattered on the common corridor outside his unit on the third floor of Block 147.

In the photos, the tree looked to have been completely uprooted.

"Thankfully, it was late and there was heavy rain so nobody was hanging around the playground when the tree fell," he said.

Lokesh said that at 9am, he saw the area around the tree was cordoned off and that people were working on cutting the tree and removing it.