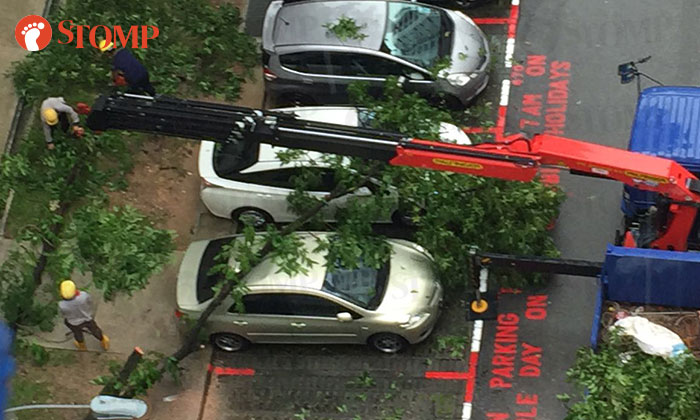 A large tree came tumbling down, crushing two cars beneath its trunk on Monday (Jan 1) at around 9am.

The incident happened at a carpark in front Block 211, Bukit Batok Street 21.

Stomper La, a resident in a nearby block, took photos and sent them to Stomp.

In the photos taken, it can be observed that the trunk of the tree had fallen on the roofs of a gold car and another white car.

There was also a dent in the roof of the gold car, while the white car looked relatively undamaged.

According to La, a small crowd had gathered around the scene, and many were taking photographs of the situation.

Workers arrived later to remove the trunk and debris.

La also gave her thoughts on the incident:

“It is probably due to the incessant rain throughout Sunday afternoon and night which soften the soil, making the tree unstable.

"I don't think anyone was hurt.

"There weren't any paramedics or ambulances."

Related Stories
Taxi crushed by massive fallen tree at Choa Chu Kang North 6
Biker in coma after tree branches fall on him: 'We don't know if he will wake up'
Videos and photos: 1 dead, 4 injured after 40m tall Tembusu tree falls at Botanic Gardens
More About:
fallen tree
carpark
damage