'Not possible' that man got banned from interchange for pasting sticker on buses: SBS Transit 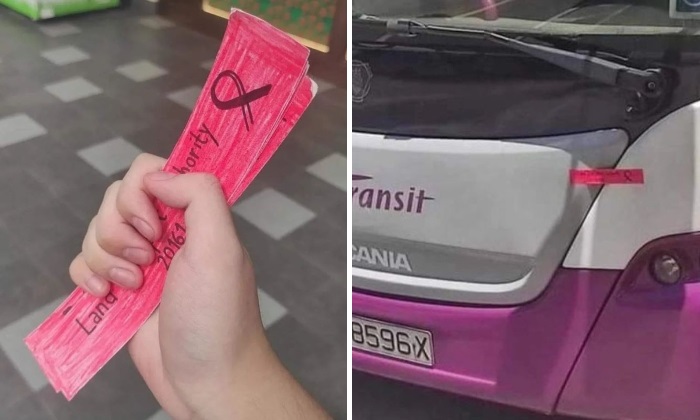 Can you actually get banned from a bus interchange? Short answer: No.

Instagram page sgfollowsall shared a series of photos on Sunday (May 29), which included a claim that said: "rip i got banned from tamp int for 2 months till 30 jul 2022."

The first picture shows someone clutching some hand-coloured red stickers with the handwritten words "Land Transport Authority" next to a hand-drawn LTA logo.

The next three images show an SBS Transit bus with one of the stickers on its front left bumper.

The Instagram post seemed to suggest that the original poster was banned from the Tampines Bus Interchange for pasting the stickers on buses.

In the comments section, someone claimed: "This guy always at Punggol Interchange, one of my colleagues caught him pasting on a MAN bus with the red sticker, not sure if any actions will be taken against him since his autistic."

MAN is the name of the German heavy vehicle manufacturer.

In response to a Stomp query, SBS Transit, which operates Tampines Bus Interchange, refuted the claims made in the Instagram post.

Mrs Grace Wu, Vice President (Special Grade) of Corporate Communications at SBS Transit, said on Monday (May 30): "This is actually not true. It is, in fact, not possible to impose an entry ban on the interchange which is an open public area with many entry points."