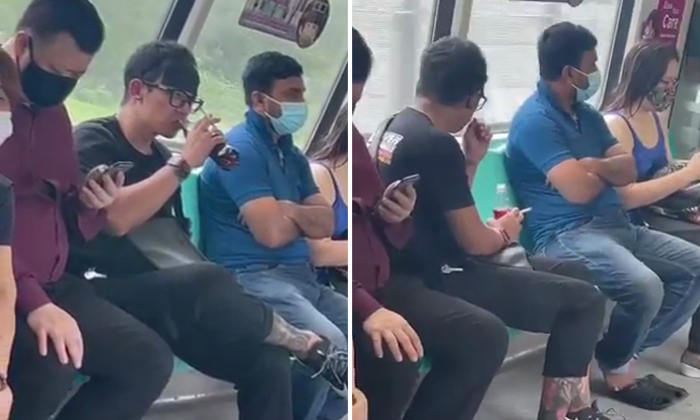 A man not only failed to have a mask on while onboard a train, but was also seen holding a cigarette, drinking a soft drink and coughing in front of other commuters.

Several readers alerted Stomp to videos of the incident that have been circulating online.

The two videos appear to have been originally posted by a user in the SG Covidiots Facebook group on Monday (Sep 6).

According to the post's caption, the incident occurred on an eastbound train between Clementi and Buona Vista MRT stations on April 1, at around 9.50am.

In the videos, an unmasked man can be seen holding a cigarette in his mouth and his hand. However, it is unclear if the cigarette was lit.

The man is also seen drinking from a bottle of Coca-Cola and then having a coughing fit.

In response to a Stomp query, Ms Margaret Teo, chief communications officer of SMRT Corporation, said it was alerted to an undated video showing an unmasked man drinking and smoking in a train on the East-West line.

"We have referred the incident to the authorities," Ms Teo added.

"SMRT does not condone socially irresponsible behaviour that affects the safety of others, and strongly encourages our commuters to keep their masks on at all times and to observe safe commuting guidelines."