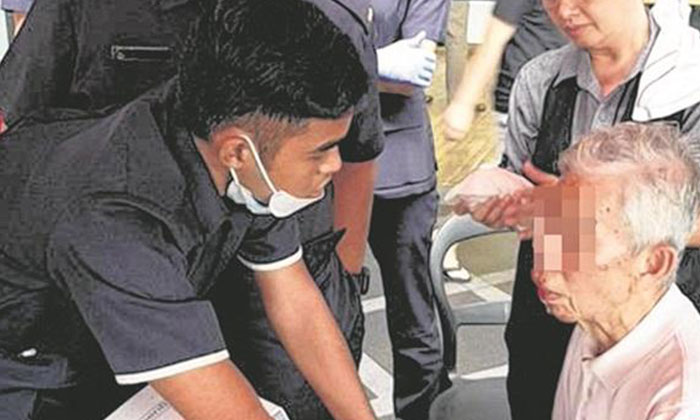 An elderly dementia patient drove out from his Rivervale Crescent home on Wednesday (Jan 17), at around 9 am only to end up missing for 26 hours.

Fortunately, he was found by kind passersby in Kallang, while the BMW he had been driving was abandoned at a back alley in Geylang.

He did not carry his mobile phone with him when he went out, and his family lost contact with him after he left home.

Mis daughter, Ms Huang Huilin, 38, said that after losing touch with her father, she quickly uploaded photos of her father as well as the car onto Facebook, hoping to find him with the help from the public.

In her post, Ms Huang revealed that her father had left home in a car, unbeknownst to her mother and the housemaid.

Although the family tried searching for him at his common hangouts, they could not find him and had to call the police.

Coincidentally, at around 10am, she ran into Mr Huang outside Tai Pei Buddhist Centre in Kallang.

“I saw the elderly man, and he had injuries on the right side of his face.

“He wasn't steady in his footsteps either and upon taking a closer look, I realised that he looked remarkably similar to the missing uncle in the Facebook post.”

Ms Lin then spoke to Mr Huang, who could not recall his name or why he was even there.

He only knew that he stays in Rivervale Crescent.

Ms Lin was certain that he was the missing person.

“I could not find the Facebook page of his daughter, and neither did I have any way to contact his family.

“So I posted on my own page, hoping that other users will help me to contact her.”

Netizens quickly passed the information on to Ms Huang, who rushed down to the scene at around 11 am to reunite with her father.

As Mr Huang had sustained injuries, he was thus conveyed to a hospital for treatment.

For the netizens' help in locating her father, Ms Huang said that she was very grateful.