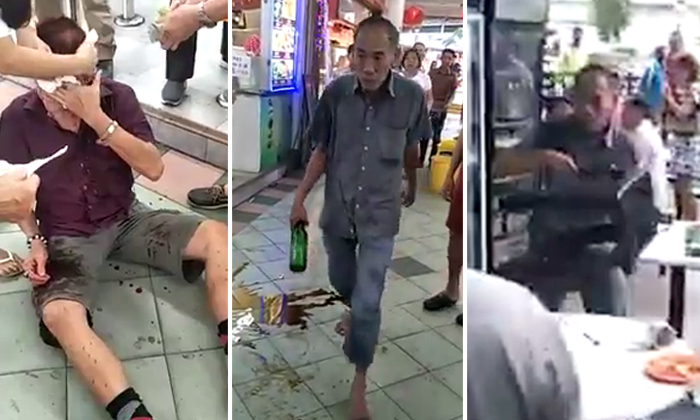 A 63-year-old man was arrested after a violent altercation with a 67-year-old man at S-11 coffee shop along Upper Cross Street on Saturday evening (Feb 3).

The police were alerted to the dispute at 34 Upper Cross Street at around 6.10pm.

The younger man was arrested for rash act causing hurt and criminal force.

A video circulating on Facebook shows a man sitting on the ground while several others attended to him by holding tissues to his bloodied face and head.

Blood stains can be spotted on his clothes and on the floor.

Another man can then be seen approaching the injured guy with a beer bottle and trying to attack the latter, despite onlookers holding him back and repeatedly saying "enough already".

Someone then pins the man down, but he struggles and breaks free before picking up a plastic chair.

This is not the first time a fight has broken out at the S-11 coffee shop along Upper Cross Street.

In August last year, two men, aged 59 and 67, were arrested after throwing punches at each other. Less than three weeks later, a 64-year-old man was arrested for affray following a fight.