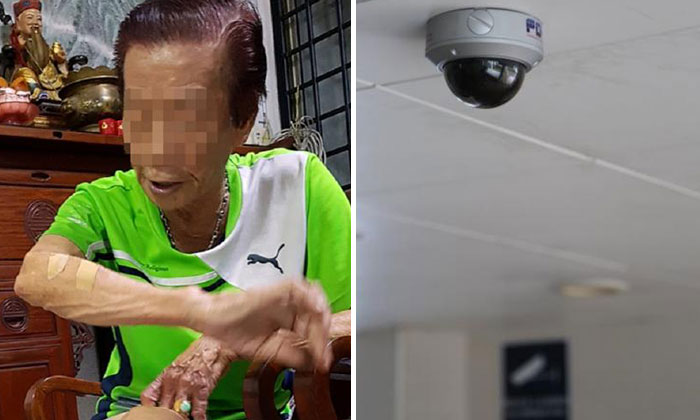 An uncle who was arrested for lodging a false police report — cutting his own arm and blaming it on an unlicensed moneylender — confessed that closed-circuit television footage showed that no one had gone near him on the day of the incident.

The incident that happened at Block 234 Hougang Avenue 1 on Friday (Jan 19) was previously reported, after Zhuo Ming Huang, 84, was arrested.

Officers had found several inconsistencies in his statements.

According to Shin Min Daily News, Zhuo had gotten into a debt, owing $1,500 to an unlicensed moneylender after borrowing money to sustain his gambling habits.

To avoid having to pay, he decided to frame the loanshark, cutting his own arm and accusing the latter of inflicting the injuries.

Zhuo told reporters that he was a school attendant, and fetched about $1,200 monthly.

Finances were tight, but he was addicted to gambling on 4D.

On October 2017, he decided to borrow money from a loanshark when he had a shortage of cash.

Zhuo admitted that he did not have any money left after paying $1,200, but claimed that the loanshark threatened to burn his home if he did not foot his debts.

He started fearing for his family and his own safety and made a false report to frame the loanshark.

Zhou also revealed that the CCTV footage only showed him and no one else attacking him as he had described.

Reporters observed that he had two plasters on his arm where the wounds were inflicted.

When asked about his condition, Zhou replied that the wounds were still in the process of recovery and he had not sought treatment.