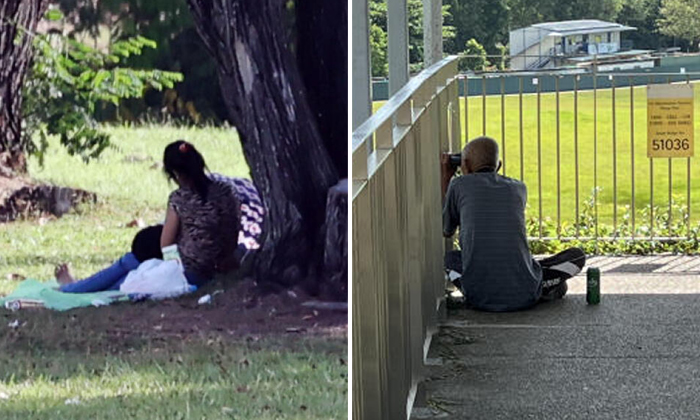 Don't be surprised if you pass by the overhead bridge near Block 114 Jurong East Street 13 and happen to see a man armed with binoculars.

Ms Huang told Shin Min Daily News that since the start of the year, she has spotted the man using a pair of binoculars to peep at the grass field in front of Chinese Garden MRT station every Sunday.

His target? Domestic helpers and migrant workers having dates under the trees.

Ms Huang said: "He puts the binoculars down as soon as he sees someone passing by. This has been going on for months. I didn't pay much attention at first but now it feels strange."

According to Ms Huang, many maids and foreign workers hang out at the grass patch every Sunday for picnics, football and other activities. Hence, she felt that the man was "obviously" spying on them.

She added: "Maids and foreign workers have the right to privacy too. They should not be spied on without their knowledge. The uncle's behavior is very inappropriate and I can't stand it anymore."

Maids and workers that Shin Min spoke to said they were aware of the man watching them.

It is believed that the uncle often visits the overhead bridge as he wants to watch the couples behaving intimately, reported Shin Min.

However, the man denied such claims when approached by the Chinese-language daily.

He said: "I'm not using binoculars to spy on other people's HDB flats. The grass is a public area. How can it be considered an invasion of privacy?"

But Ms Huang remains unconvinced, pointing out that the man does not show up when it rains.

She explained: "When the maids don't come, neither does he. This makes me even more sure that he specially came to peep at them on their dates."