Uncle, please watch where you place your hand -- this woman is clearly uncomfortable 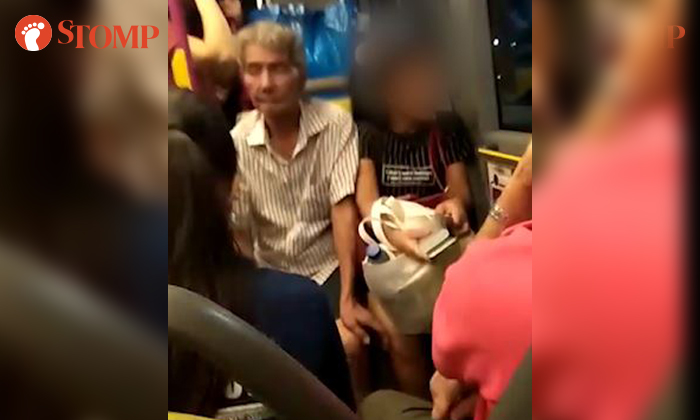 An elderly man was caught on camera touching a woman's leg inappropriately on a bus on Nov 19.

Stomper Jenny, who recorded the video, boarded Bus 50 along with the elderly man and woman at the bus stop outside Jubilee Square at around 8pm.

She noticed the man behaving inappropriately to the female passenger who was seated next to him, which was why she decided to start recording a video.

Stomp has masked the woman's face in the video to protect her identity.

However, in the original video from Jenny, the woman was visibly uncomfortable as the elderly man continued touching her leg throughout the bus ride.

Towards the end of the video, the man moved his hand away as the woman turned around. He then proceeded to alight the bus.

Said the Stomper in a telephone interview: "She kept squeezing herself to the corner. Later, when she turned to look at the man, he quickly moved his hand away."

The Stomper managed to ask the woman why she did not speak up and she told the Stomper that she was scared.

"I told her that if she had shouted, someone or the bus captain would have done something."

"I wish she would have said something as these kinds of incidents shouldn't be happening," said the Stomper.