Uncle Philip shares why he gives out handwritten notes to staff and students, gets Stomp Goody Bag 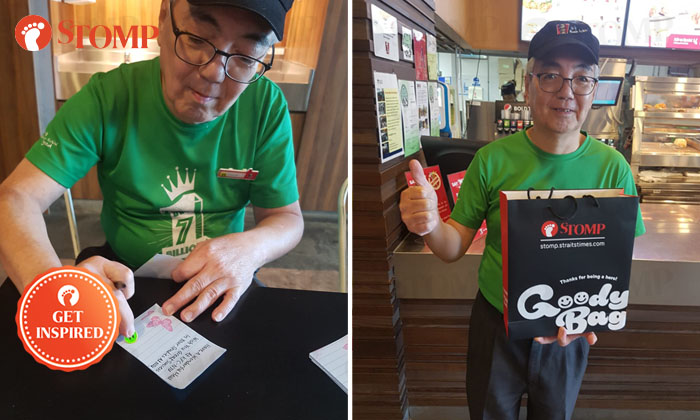 Philip Chong, or better known as Uncle Philip to the staff and students of Nanyang Technological University (NTU), has been giving out handwritten notes for over three years now.

The 64-year-old was featured in a Stomp article on Aug 3, for giving a handwritten note that accompanied a student's order on Aug 2.

Stomper Adam, the student who received the note, noticed that Philip had taken the time to write these encouraging notes when he was free and there were no customers to serve, and wanted to thank him.

Hence, Stomp contacted KFC and got in touch with Philip so that we could present him with a Stomp Goody Bag for his heartwarming actions.

In an interview with Stomp on Tuesday (Aug 15), Philip shared with Stomp his career journey and his reasons for giving out notes.

He said: "I used to work for a multinational corporation (MNC) before I retired and applied for a job at KFC. I have been working here for more than four years now.

"Many years back, KFC's management started the initiative for giving out notes, and I have been doing it for more than three years already.

"The initiative was really up to the staff whether they wanted to follow or not, one must have the passion in doing it, and not everybody has the passion to do it," said Philip with a laugh.

"The reason I started writing the notes was that the first time when I saw students coming out of the lecture halls looking like they emerged from a battlefield, looking so glum.

"So the idea came to me to write something encouraging to them to stir up their morale and to motivate them, because I believe that every post-it note that's written speaks life and speaks encouragement to the students, that's why they appreciate what I've given them and it is something that motivates them."

Christine, 20, was of the students who received a note from Philip.

Christine said: "I felt happy because it is not every day one receives such a note from a stranger. My friend and I bought a meal and he [Philip] served us.

"I felt like we bothered him a bit because we didn't state our orders clearly and he was a bit confused and I was like, oh no we're giving him so much trouble but when we were eating he still came over to give us the note."

Recounting the students' reactions upon receiving his notes, Philip broke into a dimpled smile.

"They like it and appreciate it. They come to my counter to thank me, and they also use my post-it notes to write their appreciation," he said.

"Some of those who graduated also came and told me, 'Uncle Philip, your note is still with me. I put it on the wall in my room.' And those who have not graduated told me they put it in their own classes.

"I write about 50 to 60 notes a day, two different sets, one for the working class, such as lecturers and construction workers who come here to eat, and one for the students.

"To students, I write, 'Wish you a great success in your studies at NTU, have a fantastic year, believe in yourself. You're a star, stay positive, always smile.' Then I sign off as Philip. To those working, I write 'Wish you good health, great success, and wealth in your life. Stay positive, smile always, and have a fantastic year. See you again'."

Philip, who has a daughter and a son, said he encourages them as well, although he does it verbally.

When asked how he felt upon finding out he was featured on Stomp, Philip said: "It stirred up my spirit and motivated me to continue, but the thing is that you must have the passion for it."

Philip also shared a piece of advice for those out there in the working world.

"You must have passion in whatever that you do. Without passion, you are not going to achieve anything."

Stomp presented Uncle Philip with a 'Goody Bag' for being an inspiration, as part of our efforts to recognise everyday heroes and highlight heartwarming deeds.