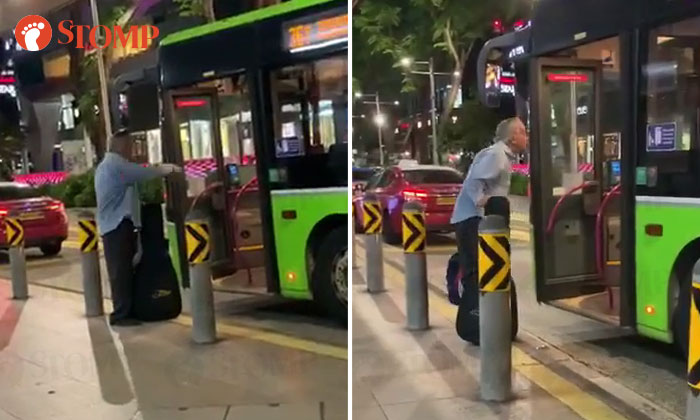 An elderly man was caught on video shouting and hurling vulgarities at a bus driver along Orchard Road in the early hours of Wednesday morning (Feb 26).

Stomper Ryan was at the bus stop in front of Tangs department store when he saw an elderly man with a guitar making a commotion.

He shared with Stomp a video he took of the incident.

He told Stomp the man was angry at the bus driver for coming to a stop 'too far' from the bus stop.

In the video, the bus is a safe distance from a queue of taxis in front of it.

The man is heard calling the bus driver stupid and spitting at him twice before walking away angrily.

"I pitied the driver because the uncle spat in front of him," said Ryan.

"The driver is right, he cannot stop exactly in the bus stop area due to the long taxi queue in front.

"He needed space for him to overtake on the right later.

"I tried to stop the uncle and gesture for him to just let the bus go but he kicked the door.

"He didn't understand why the bus driver had stopped where he did."