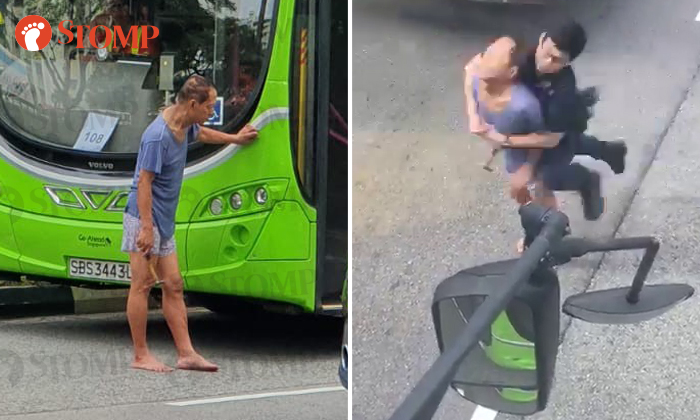 A 66-year-old man was arrested after blocking traffic and using a hammer to hit vehicles along Bedok North Road on Wednesday afternoon (Nov 27).

In response to a Stomp query, the police said they were alerted to the incident at 4pm.

Stomper Joey, who took photos and a video showing the hammer-wielding man in the middle of the road, said she was waiting for a bus when she witnessed the incident.

She recounted: "I was at Bedok North MRT station's Exit A when I heard a loud honk. I looked over because I thought there was an accident.

Joey told Stomp that she started taking a video because she was going to be late for class due to the incident and needed "evidence".

She added: "The uncle would hammer any vehicle that dared to drive past him. This included an Ezbuy lorry, a Mercedes, and a bus 518 that was trying to move off.

"Many motorists who were travelling along that road were affected as no one dared to move off, resulting in a slight traffic jam."

Joey then called the police. A motorcyclist and a motorist also stopped to help do the same.

The Stomper said: "No one dared to stop him as he was holding a hammer and we all just stood there while waiting for the police to arrive.

"When the police came, it was the patrol cars who arrived first, but they were on the opposite side of the road, which was blocked by a green railing. They assessed the situation and tried to get the uncle to move away from the front of the bus.

"Eventually, some officers in long-sleeved uniforms came to the scene. They had to leave their vehicle behind due to the jam.

"The arrival of the officers distracted the uncle long enough that the first officers who arrived at the scene were able to tackle him and take him down.

"There were officers with guns and in what I assume were bullet-proof vests who arrived afterwards." 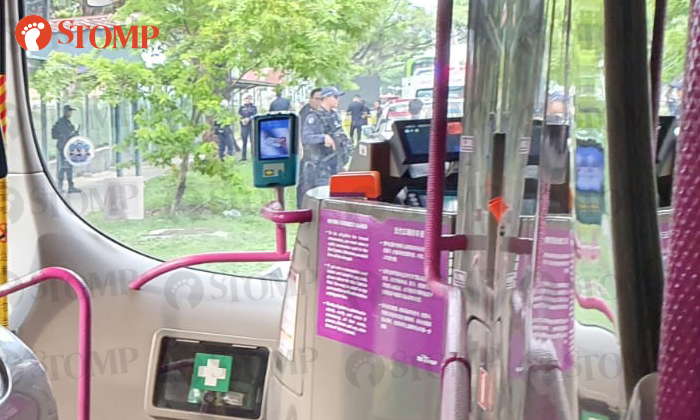 According to Joey, the police then helped to direct traffic and asked all affected vehicles to stop on the first lane.

Several Stompers also shared a video that has been circulating online, showing the man being subdued by the police.

In the video, the man can be seen hammering a lorry as it drives past him.

A police officer then tackles the man to the ground from behind and moves his hammer away, before several others rush forward and help pin down the man.

The police told Stomp that the man, who is believed to be of unsound mind, was subsequently arrested for committing a rash act.

No member of the public was injured.

The man will be charged on Thursday (Nov 28) for committing a rash act which endangers lives or the personal safety of others.

A spokesman said: "The police will seek to remand the man at the Institute of Mental Health for psychiatric assessment."