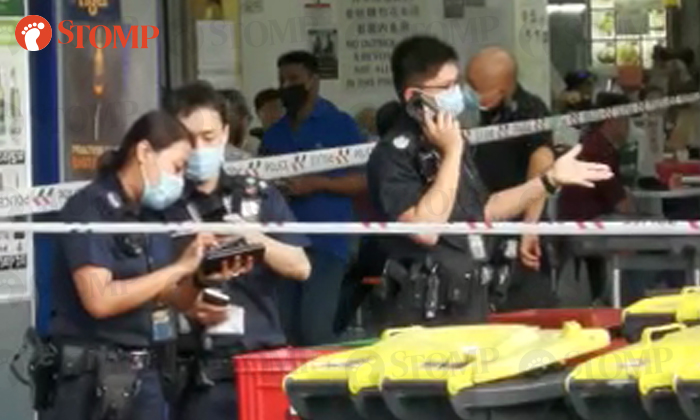 A fight that broke out at a coffee shop along Upper Cross Street on Sunday (June 28) saw one man getting arrested and another being taken to hospital.

In response to a Stomp query, the police said they were alerted to a case of hurt by rash act at 34 Upper Cross Street at 5.34pm.

A 68-year-old man was conscious when conveyed to Singapore General Hospital while another man of the same age was arrested in relation to the case.

Stomper Chan, who shared a video showing police officers at the scene, said: "There was a fight but I'm not sure what happened as I was sitting at another coffee shop in the vicinity."

This is not the first time Stomp has reported on a fight breaking out at the coffee shop located at 34 Upper Cross Street.

Earlier in February, a 63-year-old man was arrested after a violent altercation with a 67-year-old man. Both were taken to hospital.

In August last year, two men, aged 59 and 67, were arrested after throwing punches at each other. Less than three weeks later, a 64-year-old man was arrested for affray following a fight.