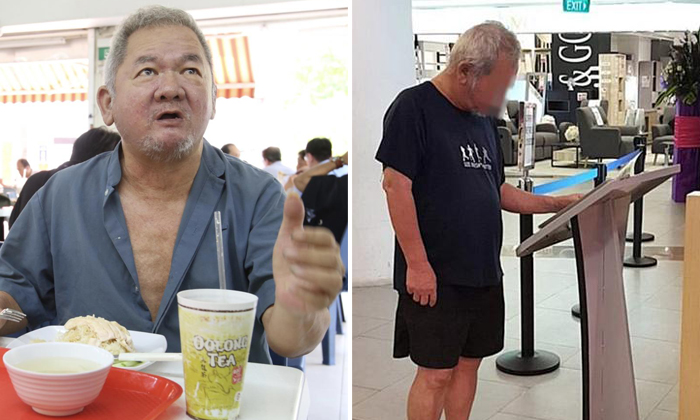 An elderly man who was accused of dining for free at multiple restaurants and eateries in Sun Plaza has spoken out with his side of the story.

It was earlier reported that the man had been appearing at the shopping centre in Sembawang for almost a month, where he would allegedly visit several food establishments for meals and leave without making payment.

More than 10 businesses at the mall said they had encountered the man, who is estimated to have accumulated a 'food debt' of around $300 in total, said Shin Min Daily News.

Shin Min reporters went down to the scene, where they saw the man outside the mall.

Shortly after, a member of the public was seen approaching the man with a free packet of chicken rice for him.

In an interview with Shin Min, 61-year-old Cai Qingfeng denied dining for free and said: "I did not intentionally refuse to pay after finishing my meal. Sometimes when I tried to make payment, the transaction would be unsuccessful.

"So I told the restaurants to put me on credit and that I would pay them when I had money.

He expressed gratitude towards the restaurants who had allowed him to be put on credit, adding that a woman had given him $5 to buy a bun for breakfast the day before.

Noticing that Cai's bank card was not a credit card, reporters asked if he was aware of how much money he owed.

Cai said the amount was not a lot and that he had tens of thousands in the bank, so it was not that he did not have money to pay up.

He also insisted that his bank card was working and said that the problem might be from the bank's end.

When reporters asked if he had any financial difficulties and whether he needed help, Cai revealed that he used to be the driver of a heavy vehicle.

According to Cai, he was involved in a fatal accident at Woodlands Industrial Park last year, in which a cyclist was killed.

Cai was sentenced to 49 days in jail and had his driving licence suspended.

He shared: "I lost my job of over ten years just like that. Now I can only depend on monthly payouts from my Central Provident Fund (CPF) to survive."