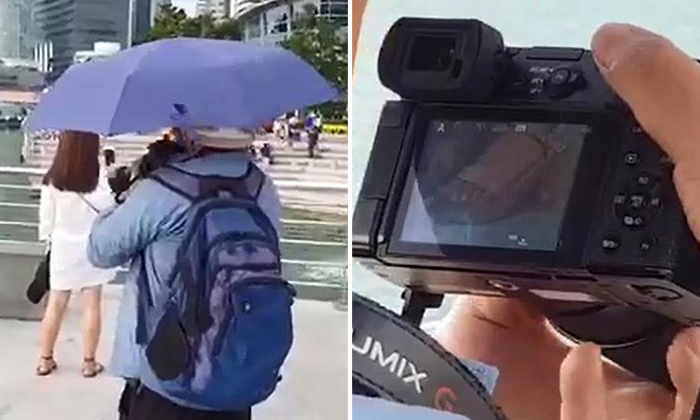 A man has been spotted behaving suspiciously at Merlion Park, allegedly using a camera to take photos of unsuspecting females.

A reader informed Shin Min Daily News about the appearance of the "weird man", alleging that he directed his camera at women's legs and specifically targeted those in short skirts.

Footage taken at the scene showed the place being filled with tourists.

A man wearing a blue shirt and white cap while holding a blue umbrella could be seen lurking around.

He also had a camera in his hands but the lens was facing downwards, apparently aimed at a few women who were clad in short skirts.

He was reportedly seen clicking the shutter non-stop and then looking around to "search for his next target".

Mr Ding, 60, told Shin Min that he often visited the park for a stroll and has been noticing the man there every Sunday, at around 8am, in the past month.

He said the man, always dressed in the same shirt and holding an umbrella, appeared to be behaving strangely.

"As he is particularly attention-catching, I recognised him at one glance," added Mr Ding.

"He is always holding an umbrella, apparently trying to block his camera so that people won't notice that he is taking photos.

"Every time he sees a woman in a short skirt, he would aim his camera at them."

As Merlion Park is an iconic attraction in Singapore, Mr Ding is worried that the man's behaviour will leave a bad impression on tourists.

Mr Ding also said that he had called the police a year ago when he noticed the man.

At that time, police had arrived at the scene and requested that the man delete his photos.

Mr Ding said he saw that the photos were of women's legs.

The man subsequently left the premises and "disappeared" for several months, only to make a recent reappearance again.