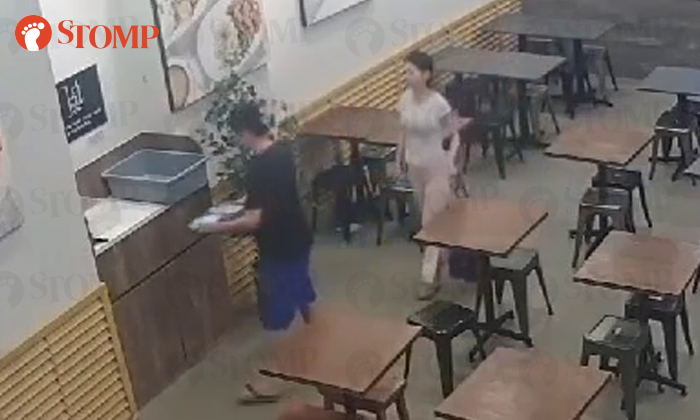 The Stomper said the man has reached out to her and apologised. However, the man later contacted Stomp and denied apologising. He said that the incident was a misunderstanding as he did not intentionally throw away the bowls and cutlery.

It has become almost like a reflex for diners to air their grievances on social media when they are upset with their food orders.

A man, however, took matters into his own hands by binning a restaurant's bowls and cutlery to express his unhappiness.

Eleanor said that the man, who was with a woman, had thrown away her restaurant's bowls and utensils as they were unhappy that Soi 19 Thai Wanton Mee no longer offered different serving sizes.

The Stomper recounted: "This couple walked in to have dinner at around 6.30pm. They seemed to have visited our shop before as they requested for different sizes of noodles.

"However, we have since changed to serve only one standard size due to quality control. My staff informed the man about this. He was unhappy but continued to order one bowl of noodles to share with his girlfriend.

"While eating, the man commented that he would not come back to our restaurant. This was heard by three staff members who were behind the cashier counter as the couple were seated nearby. The couple ate very quickly and left.

"When my staff wanted to clear the tray afterwards, they realised that the bowls and utensils had been dumped in the rubbish bin. Only when we checked the CCTV footage then did we find out what the man had done."

CCTV footage that Eleanor shared with Stomp shows the man carrying a tray with a small bowl, a big bowl, two small dishes and cutlery to the dustbin.

He then dumps the contents of the tray in the bin, before placing the tray in a container on top of the dustbin and leaving with his female companion.

Eleanor told Stomp: "Just because we no longer serve different sizes of noodles due to quality control, he dumped our bowls and utensils in the bin after eating. Luckily, they were not damaged.

"I am sharing this incident about ugly customers not to shame them, but to appeal to everyone to be more understanding, especially to those of us in the food & beverage industry.

"Some customers might not understand why we need to standardize having one size of noodles, but we have to strive to maintain a consistent standard across our branches."