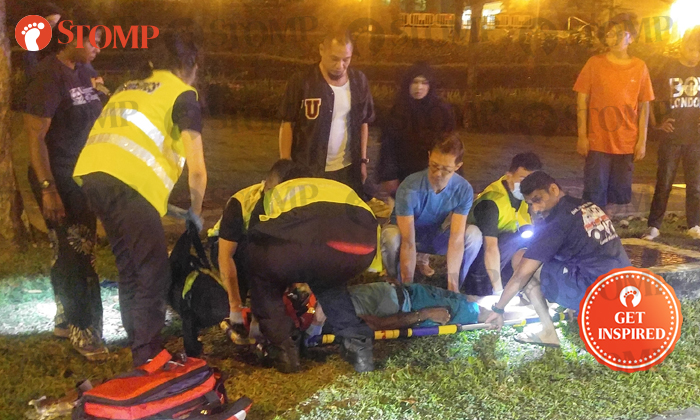 Stomper Barnabas, an Uber driver, was sending a couple to their destination when they noticed a motorcyclist who had been in an accident along Choa Chu Kang Way.

Instead of simply driving off despite it being after midnight on March 11, the three decided to stop and render their assistance.

Barnabas told Stomp: "My passengers, a man and a woman, saw a man lying on the side of the road with a fallen bike nearby.

"They immediately asked me to make a U-turn to help."

He said that he used his car to act like a shield around the motorcycle, while his passengers attended to the victim.

The three then waited till the ambulance arrived.

The Stomper added: "Someone else had already called the ambulance, but everyone was just standing around the victim instead of helping him.

"My passengers also assisted paramedics in getting the injured person onto the ambulance."

When interviewed by Stomp, Barnabas brushed off what he did and commended his passengers instead.

He said: "They are great people with great hearts.

"I'm thankful for people like them who make a difference and make the world a better place."

We think that Barnabas is being modest and deserves to be lauded too!

In response to a Stomp query, the police said they were alerted to the accident along Choa Chu Kang Way, towards Sungei Kadut, at 12.11am.

The Singapore Civil Defence Force (SCDF) told Stomp that it responded to a traffic accident at 12.10am.