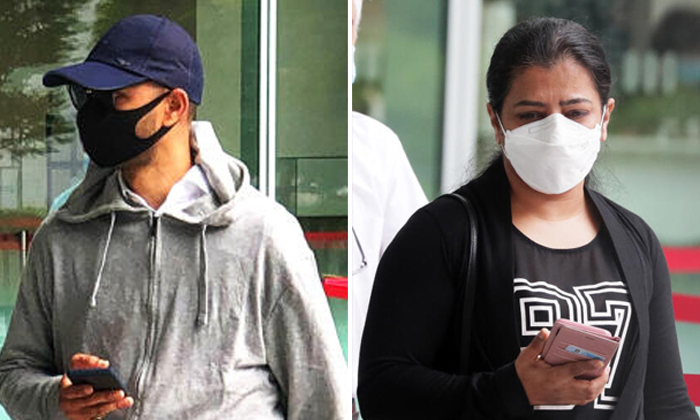 A desire to chat and share snacks while serving stay-home notice (SHN) in a hotel here has earned two travellers a stay behind bars.

Bojanki Suresh Naidu, 37, and Bharati Tulshiram Choudhari, 48, were each sentenced to three weeks' jail on Tuesday (Aug 17) for breaching their SHNs.

They had each pleaded guilty to a charge of exposing others to the risk of infection while having reason to suspect they may have been carriers of Covid-19.

Another charge for not wearing a mask was taken into consideration for Suresh during sentencing.

The Indian nationals had flown into Singapore on the same flight from India on March 14.

The prosecution said this was at the height of the second wave in India, with the Delta variant causing record-breaking infections and deaths.

Both are Singapore permanent residents, and did not know each other prior to the flight. But they became acquainted as their rooms were both on the 16th floor of Oasia Hotel Novena.

They exchanged numbers after Suresh, a logistics lead with pharmaceutical company Novartis, dialled the number for Bharati's room. She was unemployed at the time.

They came up with a plan to meet at her room, for Suresh to collect snacks from Bharati and for them to chat.

At about 12.30am on March 20, Suresh left his room without wearing a mask and went to Bharati's room.

She opened the door for him and they were in the room together till about 1am.

When Suresh went back to his room, he found himself locked out, and went back to Bharati's room for another five minutes.

He then used his mobile phone to call the hotel staff, and a security officer let him back into his room at about 1.20am.

The officer asked Suresh how he came to be locked out, and Suresh lied by claiming he had difficulties breathing and had left his room for fresh air.

When the Immigration and Checkpoints Authority investigated, the duo lied and attempted to portray their meeting as accidental.

Suresh claimed that he drank two cans of beer and felt suffocated, leaving to get fresh air. He said he had knocked on Bharati's door for help.

Bharati lied that she heard a knock and found Suresh outside her door, claiming that he was feeling suffocated and needed help.

But their story fell apart because of security camera footage of the hotel's corridor which showed that they had both opened their doors at the same time at 12.30am, as prearranged.

On Tuesday, both pleaded for leniency from the court.

Bharati said she has been living in Singapore for 11 years, and that she has embarrassed her family.

Suresh said he has been living in Singapore for more than a decade, and had been a volunteer at a community club for seven years.

He added that he was not in a relationship with Bharati, and that she had only wanted to help him by giving him food.

He also said he has a wife and two kids here to support.

District Judge Chay Yuen Fatt allowed both of them to defer their sentences so they could settle their personal affairs before going to jail.

For breaching their SHNs and exposing others to the risk of infection, they could each have been jailed for up to six months and fined up to $10,000.