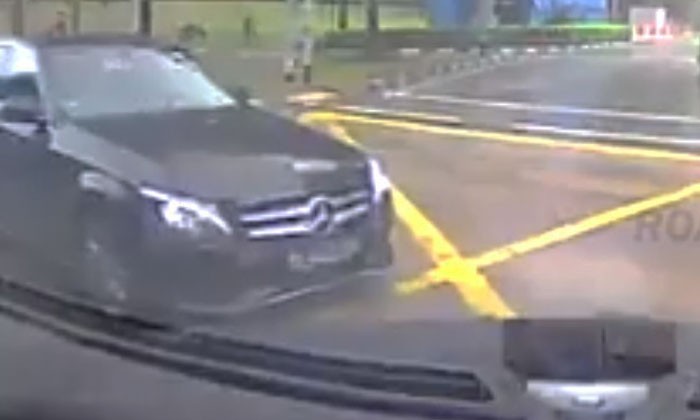 A Mercedes driver nearly caused an accident with a car and a Ferrari after beating a red light at a traffic junction.

In a video of the incident posted on ROADS.sg, the driver who recorded the incident can be first seen making a right turn. The traffic lights were in his favour.

As he was completing the turn, the Mercedes driver beat a red light on the left entered the junction at a relatively high speed.

Both drivers, as well as another driving a Ferrari who was also making the turn, managed to stop their vehicles in time, narrowly avoiding an accident.

Thereafter, the Mercedes driver reversed the vehicle, allowing the other two drivers to pass.

"Fantastic defensive driving by Sean (the driver who recorded the incident) and Ferrari driver thus avoiding a T-bone accident."

Related Stories
Driver of Ferrari SKS6645U tailgates and plays braking game with motorist then stops in the middle of Farrer Rd -- just because he didn't get his way
Woman says $1.4 million Ferrari was hit by van -- but can you see any scratches?
Ferrari spotted with excessively tinted windows and modified brake lights
More About:
reckless
dangerous
mercedes
car
Ferrari