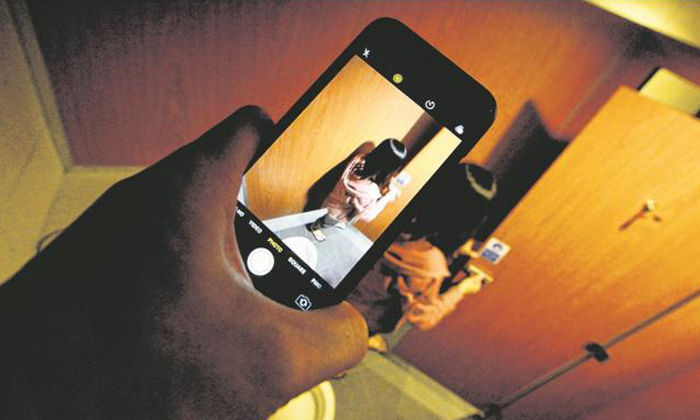 Two 16-year-old boys took over 60 obscene photos and videos of female teachers and students over the period of around one year.

These included upskirt photos and videos, as well as those that showed women showering, reported Lianhe Wanbao, who described the teenagers as 'campus wolves'.

The pair, who committed the offences from end-2016 to January this year, pleaded guilty on Sep 7 to 38 counts of outraging a woman's modesty.

The accused parties and their school cannot be named due to a gag order to protect their victims' identities.

According to court documents, the boys committed the offences together and went undiscovered until Jan 4, 2018.

That day, the first boy had been secretly filming a female student at a secondary school in central Singapore when he got caught by his victim.

A female teacher who learnt of the incident then asked the boy to unlock his phone for her to check, but he refused to cooperate.

He complied only when the teacher approached her supervisor.

Upon checking his phone, the supervisor found that it contained numerous upskirt videos, each lasting around two minutes.

Due to the severity of the matter, the school's vice-principal took over the investigation and discovered that several teachers had also been secretly filmed.

When the vice-principal asked the boy to list down his victims, he wrote down 18 names, five of which were teachers.

He also said that he did not know the names of the remaining victims.

The school subsequently informed the boy's parents and a police report was made the following day.

Investigators found 27 videos showing women's upskirts and them showering in the mobile phone of the first boy.

It was discovered that he first started his offences in end-2016 at a gaming arcade.

He went on to secretly film his teachers in school, such as from under the table during lessons. He would also place his phone -- which had its video recording function turned on -- on the floor while his unsuspecting victims walked by.

The boy is said to have committed his acts at AMK Hub, Ang Mo Kio MRT Station, Ang Mo Kio Public Library, and in various bookstores as well.