Twin sisters who assaulted security officers, spat and poured drink on one, get fined 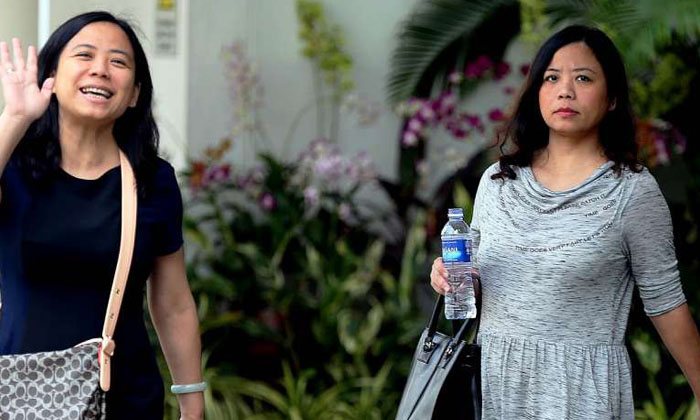 A pair of 50-year-old twin sisters, Chinese nationals Tang Bei and Tang Lei, were fined on Tuesday (Aug 28), for assaulting staff of Simei Green condominium in 2015.

The incident occurred at 11.40am on Apr 28, 2016, after Tang Bei was caught tailing other residents out of a side gate of the Simet Street 4 property earlier that year, reports The Straits Times.

The Singapore permanent resident was a tenant at the condominium but did not have a resident's pass. Court documents did not state whether Tang Lei was a resident of the estate.

In her submissions, Deputy Public Prosecutor Tan Wen Hsien said Mr Quek met Tang Bei in Feb 2015 after discovering that she was tailing residents who were leaving the estate.

When he asked her if she was a resident, she said it was "none of his business" and that she had "no time for him" before exiting the estate.

The court heard she went to the management office alone on Feb 25, 2015. Mr Quek told her documents such as an identity card and a stamped tenancy agreement are required to process her application for a condominium access card.

Although she handed him $100 to pay for it, she did not provide the necessary documents. She then turned aggressive and left after taking back her money when Mr Quek reiterated his request for the documents.

She came back again with Tang Lei on Apr 28 that year but declined to be served by Mr Quek, claiming that he had "dirty hands".

After Tang Bei scolded Mr Quek, the two sisters started punching him. They spat at his face and Tang Lei also poured the contents of her canned drink on him. The women also assaulted Mr Bligh when he entered the office.

The sisters were represented by lawyers Richard Siaw and Jasmine Teo. In her defence, Tang Bei claimed she had acted in self defence. DPP Tan said the claim was "incredible" and "flies in the face of the objective evidence".

The DPP stressed that the video footage shows the sisters attacking Mr Quek in "an unrelenting and vicious manner".

Related Stories
Man assaulted SMRT employee after being told not to eat and drink on station platform
Female friends allegedly reject visiting hotel with man -- who then punches valet driver
Man in China rains blows on toddler while she pleads, "Dad, stop beating me!"
More About:
assault
dispute