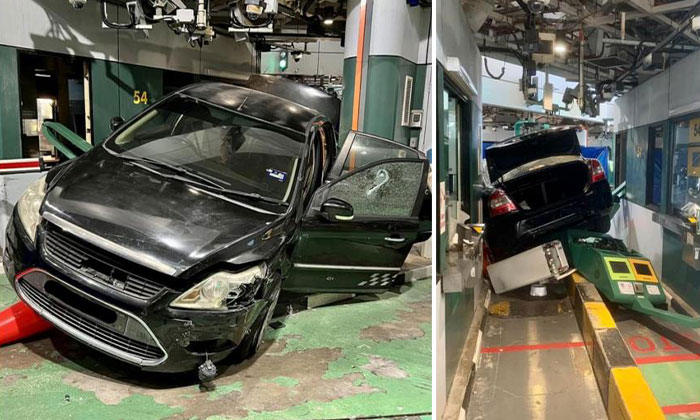 Shaffiq Alkhatib
The Straits Times
May 5, 2022

A motorist allegedly involved in a high-speed chase from Malaysia across the Second Link that ended in a crash at the Tuas checkpoint is said to be a drug offender who unlawfully fled from Singapore around 2017.

Shortly before the crash on April 8 this year, Singaporean Teo Thiam Leng, 47, was in Malaysia ferrying two passengers in a car when he spotted a Malaysian police car with its blinking lights on at around 2am.

He sped off, thinking that the officers wanted to check on him. As a result, they chased him in their vehicle before his car crashed at the Tuas checkpoint.

His two passengers - Vietnamese Ho Thi My Nhung, 31, and Chinese national Chen Songqing, 35 - fled on foot to get away from the Singapore authorities and trespassed into the cargo arrival zone.

As a result of the incident, Tuas Checkpoint Complex was locked down from 2.15am to 2.53am that day, during which traffic could not proceed.

All three were later arrested and charged in a Singapore district court.

On Thursday (May 5), Chen and Nhung were each sentenced to five weeks' jail. They had each pleaded guilty to one count of criminal trespass. Teo's case is still pending.

Defence lawyer S. S. Dhillon, who represented Chen and Nhung, said his clients had taken a lift from Teo shortly before the incident and did not anticipate the "ensuing drama" that took place.

The lawyer from Dhillon & Panoo law firm added that his clients were not aware that Teo was allegedly involved in drug-related offences.

He said: "(The pair) are disappointed... with themselves for failing to check Teo's background (before) accepting a lift from him."

Teo was driving a Malaysia-registered car towards Chen's home when he spotted the police car at around 2am on April 8 and sped off.

Deputy Public Prosecutor Teo Lu Jia said: "Chen and (Nhung) were in the car and told Teo to stop. However, Teo did not stop his car. Teo then drove his car all the way to the Malaysian checkpoint... and dashed through Malaysia's toll and checkpoint counters. Teo then sped towards Singapore, with the Malaysian police car continuing to give chase behind him."

On 8 Apr 2022, ICA has detained two men and one woman for failing to stop for arrival immigration clearance at Tuas...

The DPP said the police officers used a loud hailer to order him to stop.

Despite this, the court heard that Teo continued to drive quickly towards the motorcycle arrival zone on the second storey of the Tuas Checkpoint Complex.

As the area was only for motorcycles, three officers stationed there signalled for him to stop.

Teo then dashed through an entrance and an officer had to quickly move out of the way.

Two uniformed officers from the Immigration and Checkpoints Authority (ICA) yelled at Teo to stop but he ignored them, and crashed the car into the metal barriers and structures in the area.

After Chen and Nhung alighted, Teo suddenly reversed his car towards one of the ICA officers, who fell as a result.

Meanwhile, the two fleeing passengers jumped off a parapet and trespassed into the cargo arrival zone on the first storey.

All three were arrested soon after.

The DPP said more than 15 law enforcement officers were activated in the incident.

She added: "ICA officers were activated to quickly view all the relevant CCTV (closed-circuit television) footage to confirm that all the persons involved in this incident were arrested, and that there were no further suspects involved."

The Police Coast Guard conducted a sweep of the sea off Tuas to ensure that there was no one else involved in the incident who tried to enter Singapore illegally.

For criminal trespass, an offender can be jailed for up to three months and fined up to $1,500.