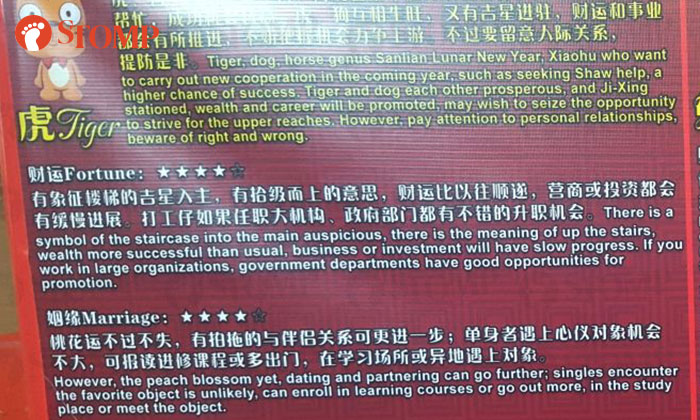 Stomper Sam recently came across horoscopes prediction for the 12 Chinese zodiac animals outside Simei MRT Station on Friday night (Jan 19), and was appalled by the terrible translation.

He took photos of each of the horoscope and sent them to Stomp.

Although the Mandarin component of each horoscope read fluently, the English components were translated badly, almost as if they had been copied and pasted from Google Translate.

“Tiger dog, horse genus Salian Lunar New Year, Xiaohu who want to carry out new cooperation in the coming year, such as seeking Shaw help, a higher chance of success” and “There is a symbol of the staircase into the main auspicious.”

“I had a good time laughing at it.

“They say Singlish is bad, but this is worse.

“I mean Singlish is accepted by Singaporeans, but this goes beyond.

“This is just literal Google translation. Someone really should have done the proofreading.

“What do they even mean?”

Related Stories
Stomper 'orders' 3,000 iPhones from seller who offered 'buy 2 get 1 free' promo
Singapore guy makes his own presentation slides to win heart of funeral undertaker
S'porean woman creates presentation slides on why you should date her, gets inbox flooded
More About:
funny
Simei
Horoscope