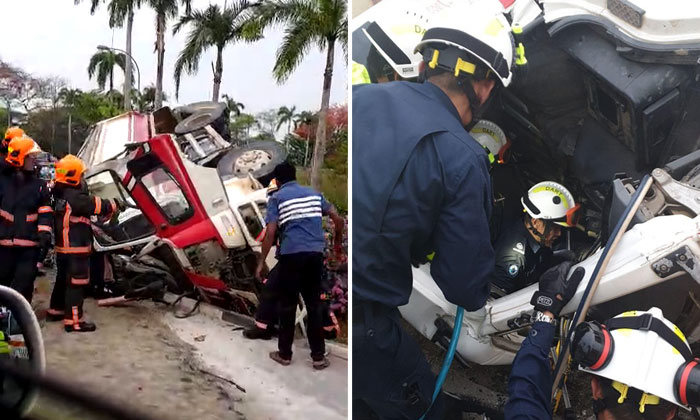 A driver was taken to hospital with leg injuries after he was pinned inside a tipper truck along the East Coast Parkway (ECP) on Thursday afternoon (Oct 31).

He was rescued by the Singapore Civil Defence Force (SCDF) in a 3½-hour operation.

A Stomper alerted Stomp to videos of the incident circulating on WhatsApp.

In the videos, SCDF officers are in the midst of the rescue operation, working on extracting the man from the overturned truck.

The SCDF said in a statement on Facebook that the accident happened after the Tanah Merah Coast Road exit at 4.17pm.

It said: "Upon SCDF's arrival at the accident scene, a tipper truck was found lying on its side.

"Its cabin was crushed inwards and the driver was pinned in his seat."

"Due to the complexity of the rescue operation, rescuers from the SCDF's elite Disaster Assistance and Rescue Team (DART) were deployed to the scene.

"A truck-mounted crane was used to stabilise the tipper truck.

"This was to minimise movement so as not to aggravate the precarious condition of the trapped driver.

"Within the confined space between the cabin and the rear tipper box, DART rescuers manoeuvred delicately, using a slew of hydraulic rescue equipment to cut their way through the badly crushed cabin to access the trapped driver.

"Upon ultimately gaining access, DART rescuers then freed the trapped driver through the passenger side of the tipper truck.

"The delicate and complex rescue operation lasted about three and a half hours.

"The driver was conscious and conveyed to Changi General Hospital with injuries to his lower limbs."