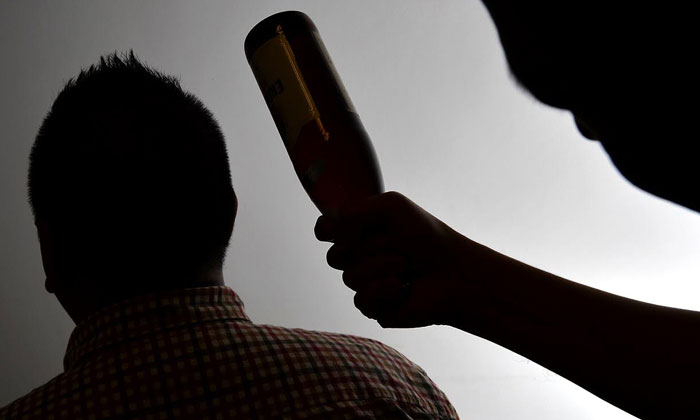 A dinner treat for colleagues to celebrate a lottery win turned ugly when one of them, a 32-year-old truck driver, smashed a beer bottle on his co-worker's forehead at a restaurant in Geylang in June, a court heard.

The victim suffered a broken skull and had to undergo surgery.

On Friday (Oct 14), Zhao Da Yong was jailed for five months after he pleaded guilty to a lesser charge of causing hurt. He had at first been charged with causing grievous hurt.

The court heard that Zhao and six colleagues from Kok Tong Construction went to Da Chang Jing Korean Hot Stone BBQ in Lorong 1, Geylang at about 6pm on June 5.

One of Zhao's colleague's had struck lottery a few days before, and had planned a dinner treat for his co-workers.

The seven men sat at a round dining table and had some beer. Zhao sat opposite the victim, Mr Chen Xiao Yong, 38.

At about 9pm, Zhao's girlfriend joined the men. Later, she offered a toast to Mr Chen.

"However, Zhao was unhappy that Mr Chen offered a return toast with only half his glass mug filled, and a heated dispute broke out," said Deputy Public Prosecutor Nicholas Lai.

Both Zhao and Mr Chen were observed to be drunk.

Colleagues shouted at them to stop quarrelling and restrained both Zhao and Mr Chen.

However, at about 10pm, as Mr Chen was about to leave the restaurant, Zhao suddenly grabbed an empty glass beer bottle and smashed it on his forehead.

One colleague restrained Zhao while others tried to stop the bleeding on Mr Chen's head.

Mr Chen was taken to hospital by a colleague in a taxi.

He had a 3cm cut on his forehead and his skull was broken, but he was too drunk to remember what exactly happened to him.

Mr Chen had to undergo surgery to repair the outer membrane enveloping his brain. He was warded for four days and given 30 days of medical leave.

Police arrested Zhao in his dormitory at 5 Defu Lane at about 1pm on June 6.

The maximum punishment for causing hurt is two years' jail and a $5,000 fine.

Related Stories
UK woman bravely shares photos of her severe injuries after her BF beat her for not wanting sex
Man in China gets stabbed in the head during fight -- and survives
More About:
beer
bottle
fight
Geylang
argument
dispute
injured
arrest
court