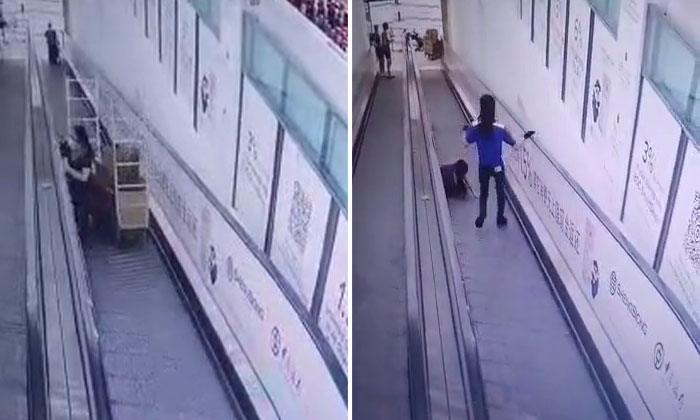 Two people were hit by a runaway trolley that rolled down a travelator in a Sheng Siong supermarket at Block 105 Canberra Street in February.

Videos of the incident were seen circulating on social media recently.

In one video that was posted on TikTok on Apr 29, the trolley rolls slowly down the travelator before hitting a woman, causing her to fall face down.

It continues rolling down the travelator and hits another person at the end of it.

A supermarket employee is then seen chasing after the trolley.

In another video, the employee is seen unloading items from the trolley when it rolls away just moments after the first woman boarded the travelator.

Trolley roll down travellator and knock down shopper

In response to a Stomp query, a Sheng Siong spokesman said: "The incident took place at our Canberra 105 store in February 2022.

"Our store personnel had immediately apologised and extended assistance to the two customers.

"The health and safety of our customers is of utmost importance to us.

"We will learn from the incident and take necessary measures to prevent such incidents."

Related Stories
73-year-old woman hit in the face by 2.5kg packet of rice that fell from supermarket shelf
'Karen' argues with FairPrice staff, accuses man of opening cream: 'Please do not act like an animal'
'Ruffian' who's banned from AMK supermarket refuses to leave, hurls vulgarities at staff
More About:
trolley
supermarket
accident
sheng siong
travelator