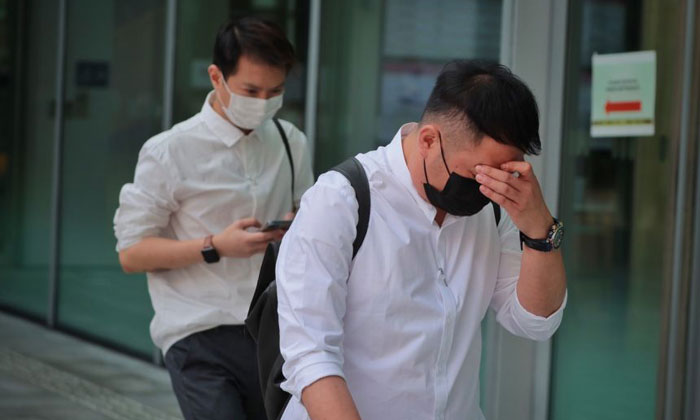 Two men accused of molesting a male Grab driver during their ride home are contesting their charges.

Goh Suet Hong and Neo Wei Meng appeared in court on Monday (Aug 2) at the start of their trial, each facing one count of outrage of modesty. They are represented by lawyer Kalaithasan Karuppaya.

Both men allegedly molested the 32-year-old driver in the vehicle sometime between 1.18am and 3.03am on Nov 12, 2018. The alleged victim cannot be named due to a gag order, to protect his identity.

Goh, 39, is said to have kissed the driver and touched his thigh and genitals over his pants.

Neo, 40, allegedly molested him underneath his clothes and touched his genitals directly.

It is not disputed in court that the driver had been assigned by Grab to pick up the duo on the day of their alleged offences.

Goh and Neo had decided to head home from Neil Road in Tanjong Pagar after a night of drinking with a friend.

Neo made the Grab booking, with arrangements for him to be dropped off at his residence first.

The driver picked up the duo and the alleged offences took place during the journey. Court documents did not specifically state how long the entire journey took.

The court heard that Goh later instructed the alleged victim to enter a multi-storey carpark near the second drop-off location.

He then alighted and told the driver to wait for him while he relieved himself.

But the alleged victim drove away and lodged a police report.

On Monday, the driver gave his testimony in-camera. This means the hearing was not open to the public, including the media.

If convicted of outrage of modesty, each man can be jailed for up to two years, fined, caned or sentenced to any combination of such punishments.

Related Stories
Man, 86, jailed for molesting 2, including child: "I'm old and about to die"
Man who sexually abused daughter 'relentlessly' and claimed she set him up gets jail, caning
Male teacher molested former pupil who had become his 'godson' during sleepover
More About:
molest
grab driver
grab
court