Fallen trees and flash floods amidst heavy rain on Tuesday 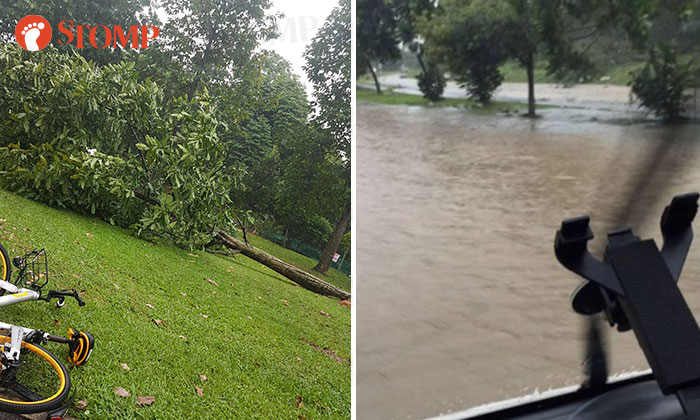 Flash floods were reported along a road in Seletar, along with several fallen trees in the north after heavy rain fell across Singapore on Tuesday evening (Jan 30).

Stomper Ah Boy who was at Yishun experienced the inclement weather in the neighbourhood as well.

“Typhoons in Yishun. All back to normal.

“Seems there was no property damaged or people injured. (I) just cleared up the mess from my corridor. My neighbour’s orchid plants all became ‘botak’.”

Stomper Chee Kiang who was also in Yishun came across several fallen trees at Yishun Central and Yishun Park after the thunderstorm.

“The trees were all fine before that. Just suddenly falling like that is pretty scary.

“I’m worried that they may hit someone.”

Asked if he had been there when the trees fell, Chee Kiang said that fortunately he wasn’t, and by the time he was there, the trees had hit the ground.

Elsewhere, the Yio Chu Kang Road exit to the Seletar Expressway (SLE) from the Tampines Expressway (TPE) was closed off due to another fallen tree.

The Land Transport Authority said in an official Tweet at 5.10pm that the exit was closed due to an obstacle.

National water agency PUB also issued a heavy rain alert at 4.14pm and quoted the National Environment Agency (NEA) which said that heavy rain was expected across Singapore from 4.50pm to 5.40pm.

Stomper M was at a petrol kiosk along Upper Thompson Road at 5pm and took several photos as lightning streaked across the overcast skies.

“My friend and I had just parked our cars at the kiosk for a car wash.

“The lightning went on for about five to ten minutes. It was really scary.”

In a video posted on Telegram traffic news channel SG No.1 All in 1 Sharing / Updates, a van is seen trying to reverse as a tree has apparently blocked the road.

Mr Alvin Chan, whose car was obstructed by a fallen tree also sent in a video to The Straits Times.

In an update by PUB, it said that the water had subsided by 5.45pm, and traffic was passable.

PUB issued an official statement on Tuesday night, saying that the flood had occurred as water from the storm exceeded the capacity of the roadside drains.

This comes after a flash flood occurred at Seletar North Link in December 2016.

PUB said that it is in the process of constructing two temporary drains in the area to alleviate the flooding.

The first drain is set to be completed in mid-February, while the other will be done by May.

“More permanent drainage is planned in tandem with upcoming developments in the area.”

The agency also attributes the storm to the north-east monsoon, which will last till March.

“We urge the public to exercise caution and avoid stepping into or driving into flooded areas.

”During this period of monsoon season, the public should stay tuned to radio broadcast and check PUB’s Facebook page or PUB’s mobile app “MyWaters” for flood updates.”