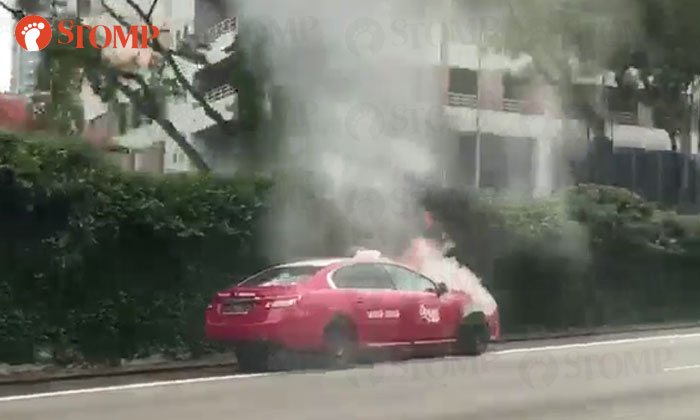 A cabby was taken to hospital after his taxi caught fire on the Central Expressway (CTE) on Wednesday afternoon (Feb 20).

Stomper Firdak alerted Stomp to the incident and shared a video he took of the burning vehicle as he was travelling past it.

In the video, flames and plumes of smoke are seen coming from the taxi's bonnet.

In response to media queries, the Singapore Civil Defence Force (SCDF) said it responded to the fire along the CTE towards Yishun, before the Moulmein Road exit at about 2.35pm.

Two compressed air foam backpacks and an extinguisher were used to put out the fire, SCDF said.

The driver was taken to Tan Tock Seng Hospital.

SCDF is investigating the cause of the fire.

A TransCab spokesman told The Straits Times that the driver was doing fine and would be checking in with the firm tomorrow.

She said that prior to the incident, three passengers had alighted from the taxi.

"We are still investigating the cause of the fire," she said.