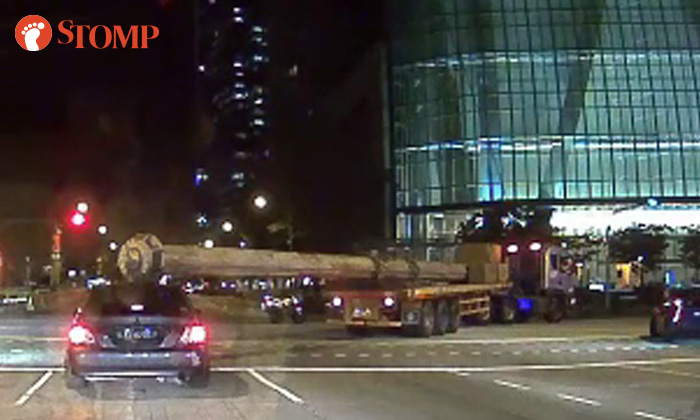 A trailer carrying a long cylindrical object was caught on camera damaging the roof of a car while it was turning at the junction of Finlayson Green and Raffles Quay on Oct 10 at about 11pm.

Stomper Mike alerted Stomp to the video which had been circulating on WhatsApp.

In the video, the trailer was traveling with an Aetos vehicle escorting it from behind.

As it was turning right on a traffic junction, the long object which it was transporting grazed the roof of a car that was beside it at the time.

In response to a Stomp media query, Aetos said: "On Oct 10, Aetos was engaged to perform a heavy vehicle escort assignment.

"A total of two outriders and an Aetos vehicle were deployed for this assignment.

"As the trailer was taking a right turn from Finlayson Green to Raffles Quay, the car involved in the incident had ignored our escort vehicle’s warning blinkers, overtook our vehicle towards the left of the trailer, which then resulted in the incident.

"We would like to remind all road users to keep a safe distance behind such heavy vehicle escorts for their safety."