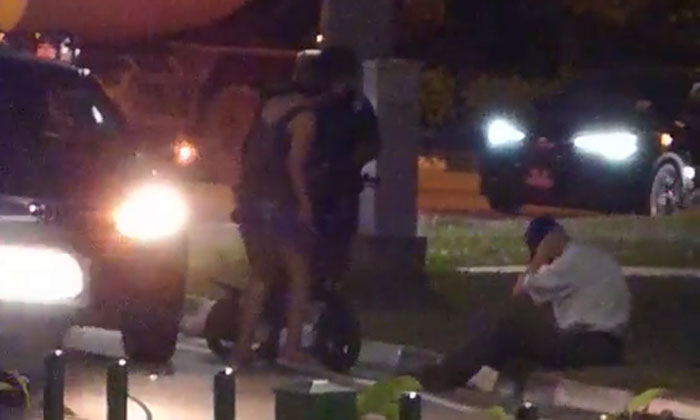 A driver was seen sitting on the side of a road in pain after he was allegedly punched by a personal mobility device (PMD) rider at the Woodlands Avenue 2 exit from the Seletar Expressway (SLE) on Friday evening (Aug 2).

A Stomper alerted Stomp to a video that was posted on SG Road Vigilante's Facebook Group page by Adrian Chew.

According to Adrian, who said he witnessed the incident at about 7.35pm, the PMD rider wearing black was shouting at the driver wearing a white shirt.

"I did not see what happened earlier, I only decided to take a video after the black shirt PMD rider hit the white shirt guy in the face, causing him to fall forwards on the grass patch," wrote Adrian.

"I am not sure what caused the altercation but it was not right to hit another person."

In the video, a woman is seen talking to the PMD rider who picks up his device and moving off from the scene.

Adrian added that he hopes the video helps the driver of the Toyota with licence plate number SLP4767T.