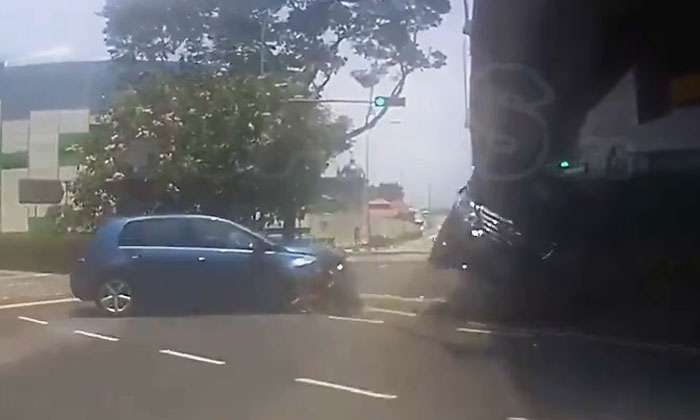 Two people were taken to hospital after one car crashed into another at the junction of Shenton Way and Keppel Road on Wednesday (Oct 3) at about 1.32pm.

A video showing the moment of impact was posted on ROADS.sg's Facebook page.

According to the video post, the driver of the Toyota Alphard with licence plate number SGJ8883E, who was coming from Shenton Way, beat the red light before getting hit by a blue car coming from Keppel Road.

In the video, the traffic light is green in favour of the blue car. The impact of the collision caused the right side of the Toyota to lift off the ground before landing back on the road again.

In response to a Stomp media query, the police said they were alerted to the accident at about 1.38pm.

A 61-year-old man and 57-year-old woman were conscious when taken to Singapore General Hospital (SGH).

It is unknown who was driving which car.