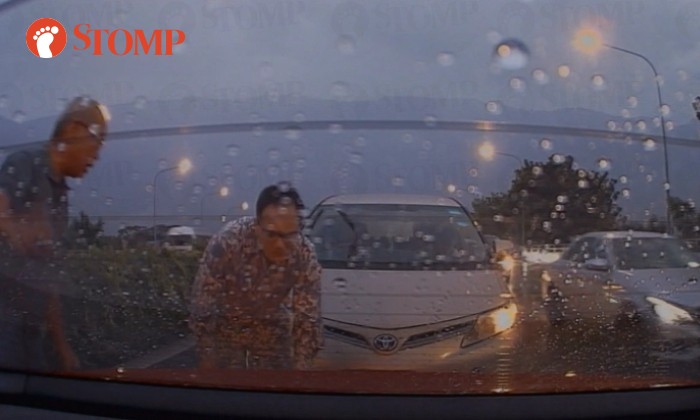 The police are investigating a hit-and-run incident that happened along the Central Expressway (CTE) towards the city on Thursday (Sep 24) at 6.50am.

Stomper Anthony informed Stomp about the incident and sent a video taken from his in-car camera.

In the video, a Toyota car can be seen hitting the rear of the Stomper's car.

A few moments later, both drivers get out of their cars to examine the damage done to both vehicles.

"While I was travelling along the CTE towards the city after Yio Chu Kang Exit, a Toyota Estima was driving behind my car," Anthony shared.

"When the car in front of me stopped due heavy traffic, I managed to stop in time.

"But the Toyota Estima behind me did not stop in time and the driver banged into my rear of the car.

"When we alighted to check the damage, the Toyota driver immediately asked if we could move to the side to check.

"I agreed but when I moved to the side, the Toyota went missing. He just drove away!

"It was my mistake that I did not take a picture of his licence plate.

"In fact, after the accident, his licence plate was folded into half, which means that I cannot see his license plate from my in-car camera.

"Not much damage was done to my red Audi A5 but I am really pissed off with the behavior of this driver."

Anthony told Stomp that he made a police report on Friday (Sep 25).