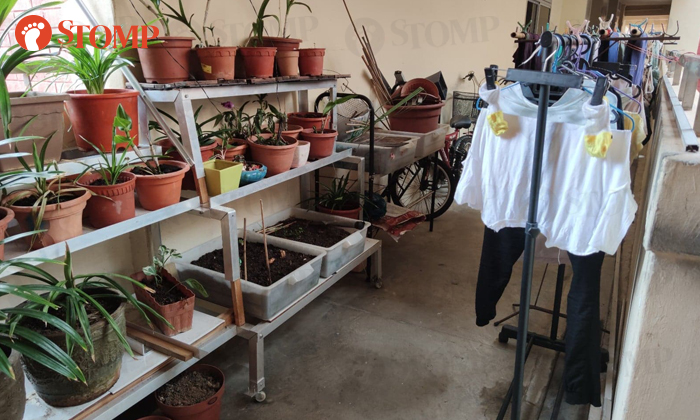 A resident in Pasir Ris is frustrated by how her neighbour has been cluttering the common corridor at their Housing Board (HDB) block with bulky items.

Stomper J, who resides on the fifth floor of Block 511 Pasir Ris Street 52, said that this has been going on for almost five years.

According to J, the situation recently worsened as the unit responsible for the clutter had a new tenant move in.

She shared 28 photos of the clutter, consisting of items such as bicycles, potted plants on metal racks, laundry hung on several racks and even granite tiles.

The Stomper also expressed safety concerns and said her exit would be obstructed in the event of an emergency.

In response to a Stomp query, a spokesman for Pasir Ris-Punggol Town Council said it has been working with J and her neighbour since October 3.

"As at October 20, the resident has acknowledged and thanked us for our efforts via email. We have also further assured her that we will continue to monitor the situation," he added.

"While we are generally flexible to allow some concession to the usage of the common corridor for our residents’ transitory needs or urban greening efforts, we do take a serious view when these items are potentially hazardous, become obstructive to others, or when they may hinder emergency rescue and evacuation efforts.

"We will base all our rectifications efforts in accordance to the Fire Safety Act (Chapter 109A) which is enforced by the Singapore Civil Defence Force (SCDF)."