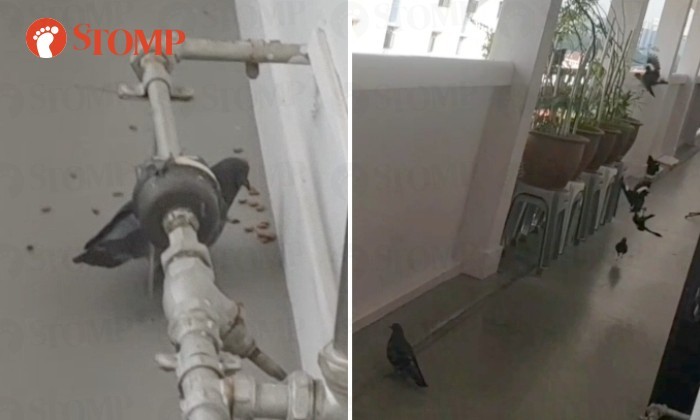 Stomper Anonymous was irked when he noticed that his neighbour left food outside his flat for pigeons to feed on it.

His frustration grew when he realised it was not a one-time incident, but rather a habit of his neighbour's.

Anonymous shared that his neighbour, who stays next door to him at Balam Road, has been feeding these pigeons since May this year.

In the video that the Stomper took on Nov 25 at 5.33pm, birds can be seen gathering outside his neighbour's flat to eat the food on the floor.

The loud sounds of birds chirping can also be heard.

"My neighbour frequently opens the door, drops some type of bird food at his doorstep and immediately closes his door before the birds arrive," Anonymous said.

"I wasn't fast enough to capture his act of dropping the bird food on the floor but you can see in the video that the food attracts many pigeons.

"I showed my friends the videos and they laughed and said my house has turned into a mini bird park, which is true.

"Not only is it so noisy, but these birds leave a lot of droppings. I'm sure it's unhygienic to have this much bird droppings outside the house.

"I have informed Marine Parade Town Council about this and I just hope this inconsiderate behaviour can be stopped."

In response to a Stomp query, a spokesman for Marine Parade Town Council said they are aware of the reader’s feedback and have been working with the relevant authorities to address this pigeon feeding issue.

"In addition, the town council has also put up posters and banners in common areas to advise and educate residents against pigeon feeding," added the spokesman.

"We would also like to take this opportunity to remind our residents to keep our environment clean and mitigate the population growth of birds in the estate by refraining from feeding the birds."