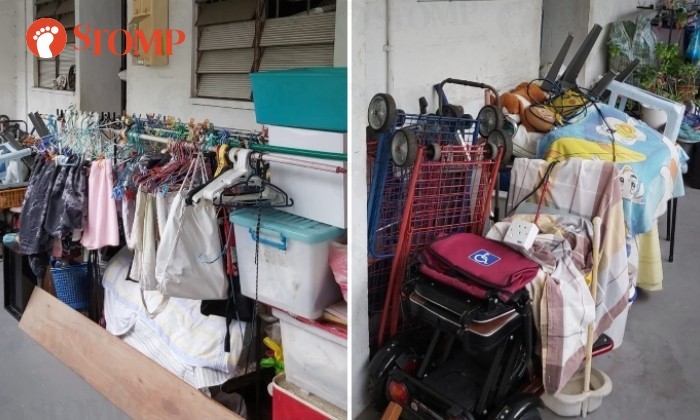 When Stomper Anonymous moved into his new flat at Block 138 Bedok North Street 2 one month ago, he was shocked to see clothes, chairs and other items cluttering the corridor.

He shared photos of the clutter with Stomp on Sunday (Nov 8).

Photos show boxes stacked on top of each other and multiple chairs covered by blankets and cloths.

There also seems to be a fair share of bamboo poles with rags and bags attached to them.

"I'm a new resident here, and I noticed this clutter along the corridor one month ago," Anonymous said.

"These bulky items are affecting the residents living on this floor and it is actually really smelly."

The Stomper added that he has yet to speak to his neighbour about this.

"I think his leg is injured, and may have difficulty moving the bulky items," said the Stomper.

"But I informed the town council about this as these items are a potential fire hazard.

"Mosquitoes might even breed in this clutter, which I think might have already happened because I've been getting many mosquito bites."

In response to a Stomp query, a spokesman for East Coast Town Council said that it, along with their grassroots members, is aware of this unit keeping miscellaneous items along the corridor.

"We are in the process of working with the house owner to reduce their clutter and will not hesitate to take further action if the clutter is not removed," added the spokesman.