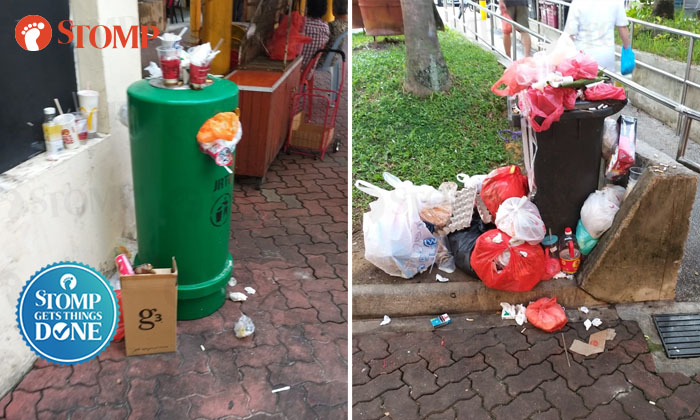 A Jurong-Clementi Town Council spokesman said that measures will be taken to improve the situation, following Stomp's query regarding a resident's feedback on the issue of overfilled dustbins.

Stomper Tan was in the area of Block 154A Bukit Batok West Avenue 8 at about 11.30am last Saturday (Sep 22) when a few over-capacitated bins caught his eye.

Tan, who resides in the area and passes by almost every weekend, said he noticed this issue since two to three months ago.

In photos taken by him, the dustbins are seen filled to the brim, surrounded by rubbish that was littered around it.

He said: "The area is outside a supermarket, and the bins are almost always full and dirty. It's also smelly.

"Every time after I report the case, the bin and its surroundings would be cleared after one or two days but it will soon become full and dirty again.

"I suggest putting more bins in the area to cater to the human traffic there, since I understand that it is near a marketplace and a lot of rubbish is bound to be thrown away."

The Jurong-Clementi Town Council spokesman told Stomp: "We will be increasing the frequency of clearing the litter bins. Additionally, extra bins will be placed for the residents' use so as to prevent over-spillage of refuse.

"We would also like to seek the residents' help to alert us on 6561 2222 if they come across any of our refuse receptacles which have reached their full capacity."