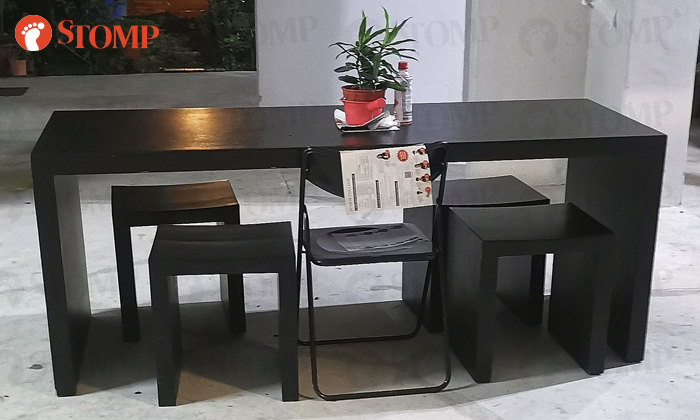 The town council has served a notice for the removal of tables and chairs placed at the void deck of Block 620 Yishun Ring Road following feedback from a resident.

Stomper George, a resident in the estate, was surprised to see people using the furniture to have gatherings at the void deck.

He recounted: "I notice the peculiar sight at the void deck whenever I pass by that block after work at night."

George said that as this had been happening "over the last few weeks", he decided to take photos on Thursday (Nov 19) and submitted them to Stomp.

He told Stomp: "There's a small plot of fenced garden under the block. Many chairs are stacked inside the garden, and even an office table and chairs have randomly popped out beside the garden in the middle of the void deck along with personal times.

"Now whenever I pass by the block at night between 8pm to 9pm, I would see a large gathering of the same people occupying those chairs and tables in groups of at least six to eight people. They sit in close proximity, with some openly talking without masks.

"This has become a daily affair with no regard to the Covid-19 regulations. The last time I passed by, there were six chairs and now there are 12.

"The question in mind is: Is the placement of tables and chairs as well as the hogging of the void deck an abuse of public spaces which serve no benefit to anyone except for these people's own personal use?"

George noted that there were already "a lot of" chairs installed at the void deck to begin with.

He added: "I believe this sets a wrong precedent. It is absurd to see people marking their 'territory' at the void deck by placing tables and chairs to form their own gathering space."

In response to a Stomp query, a spokesman for Nee Soon Town Council said it has conducted a check and served a notice for removal of the tables and chairs.

The spokesman added: "In view of current COVID-19 measures, we seek residents' understanding and cooperation in safeguarding their personal and public wellbeing."

Members of the public are also advised to report any breach of safe distancing measures through the OneService App.