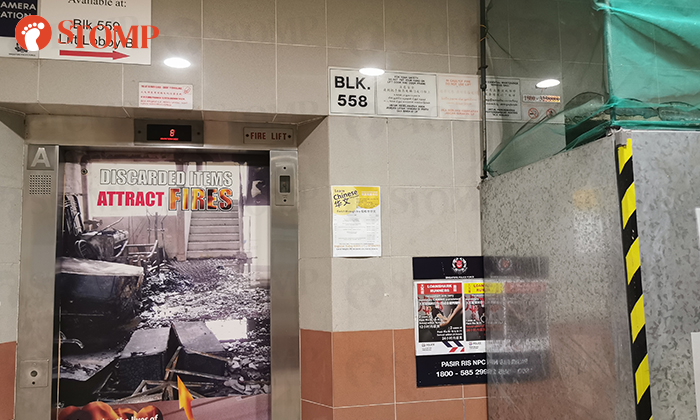 A resident at Block 558 Pasir Ris Street 51 was concerned about how lift upgrading works at his block would affect wheelchair users after finding no lifts working once in the past month.

Stomper James contributed photos of the lift and said: "The lift has been closed since mid-December last year.

"They're upgrading the lift but the remaining one has already broken down once in the past month."

James told Stomp that he's worried about how the lift breaking down could bring inconvenience to wheelchair-bound residents.

"There is quite a number of people who are on wheelchairs in my block," said James.

"I've been living in a flat on the fifth floor for about nine years and the lifts here do break down rather frequently.

"One of the lifts would be down about every two to three months.

"I think there's a need for maintenance to be done more frequently to ensure that the lift is always working."

In response to a Stomp query, a Pasir Ris - Punggol Town Council spokesperson said: "We recognize that there will be inconveniences during the period while Town Council carry out the lift upgrading the works.

"Please be assured that we have worked with our contractor to complete the works as soon as possible.

"In view of the increased usage of the lift that is in operation, the Town Council has since worked with the lift contractor to ensure that it is available for use at all times.

"In the event that this lift is affected, the lift contractor has committed to respond to feedback expeditiously."