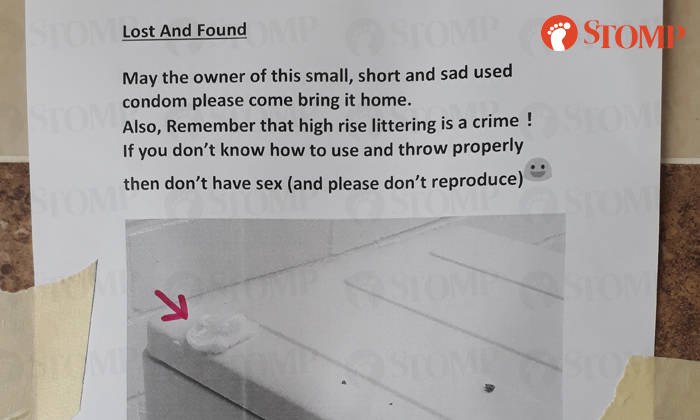 Notices about a used condom that was discarded from height in Bishan have been removed by the town council.

Stomper Liz had earlier shared how she came across the unusual 'lost-and-found' notices on several storeys of Block 177 Bishan Street 13 on Tuesday (Jan 12).

The notices, which came in English and Chinese, chastised a litterbug for not properly disposing of a "small, short and sad used condom".

Accompanying the note was a photo of the offending item, which had been thrown from height and landed on a resident' air-con compressor.

In response to a Stomp query, a spokesman for Bishan-Toa Payoh Town Council (BTPTC) said: "The Block 177 complainant had written to us on Monday (Jan 11) to report about the high-rise littering of a used condom which landed on his aircon ledge.

The town council replied the resident on the same day.

The spokesman added: "High-rise littering issues fall under the purview of the National Environment Agency (NEA) and they have been alerted.

"BTPTC is working closely with NEA to monitor the situation and take the necessary measures.

"The unauthorised notices have since been removed as the town council does not allow the display of publicity materials on lift lobby walls and common spaces."