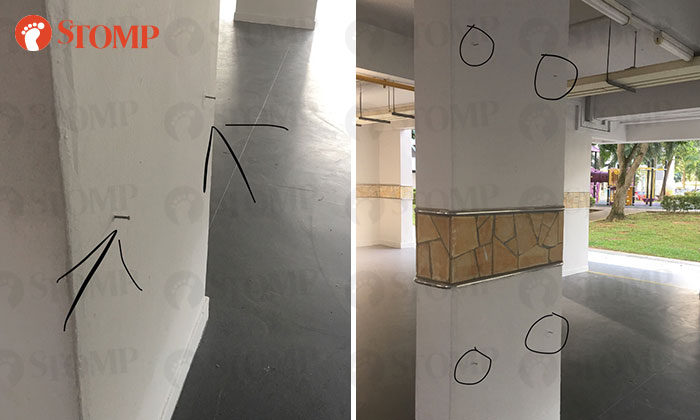 Stomper Harmony became concerned after spotting nails which were protruding from the void deck walls at Block 217 Marsiling Crescent.

Harmony told Stomp in a phone interview that he had spotted the nails on Monday afternoon (July 2). He said that he suspected that the nails were left behind after a wedding event held at the void deck which ran from Saturday (June 29) to Sunday (June 30). The nails were left on the wall with their flattened heads protruding out.

Worried that the nails would pose a safety hazard to residents in the area, Harmony called the Essential Maintenance Service Unit (EMSU) and told them about the problem.

According to Harmony, officers were subsequently dispatched to the scene and the nails were removed.

“There were some nails that were placed higher up so usually people won’t be able to reach them.

“Those which were placed lower, such as those below 1.5m in height were much more dangerous. These could have hurt residents, especially children.

“Furthermore these event planners chipped off part of the walls when they tried to drive the nails in.

“This is considered vandalism. Even if they needed to place something on the wall, they could have used either an S or G-clamp. Other event planners in the past have used these before too. These do not damage the wall.

In response to a Stomp query, a spokesman from the Marsiling-Yew Tee Town Council said:

“We were alerted on Wednesday (July 4) at 5:11pm about the protruding nails left behind from a wedding event.

“Upon receiving the feedback, we immediately deployed our ground staff to rectify the problem onsite.

“We take a very serious view of this incident as the safety of our residents is our paramount concern. Tampering with the walls is considered a breach under the Town Council’s terms and conditions for facilities booking.

“The refundable deposit will be forfeited when there is such an infringement.

“We are sorry for our oversight and we would like to assure residents that all the nails have been removed.

“We are now conducting a thorough inspection and doing a final touchup of the wall."