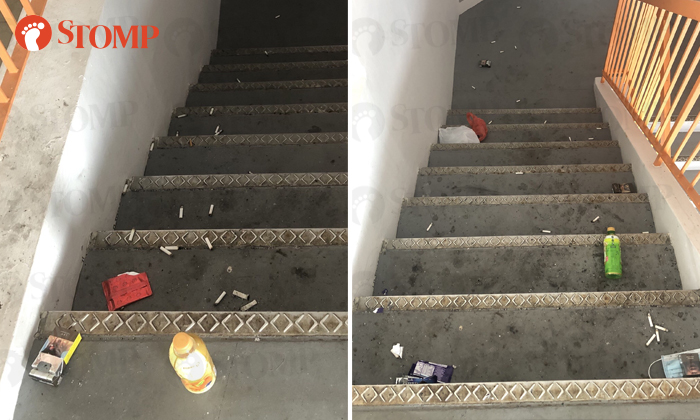 Youths have been defying circuit breaker measures by having gatherings in both public and private spaces despite the risks and consequences.

This is an ongoing problem that occurs on a daily basis at Block 363 Tampines Street 34.

Stomper Resident said that youths have been gathering at the lift lobby and staircase landing area on the 10th floor of the block every night, sometimes even during wee hours.

He told Stomp: "They chat and laugh at volumes loud enough to be heard at both ends of the block even at 2am.

"Not only are they noisy, they are also very irresponsible and inconsiderate of other residents by littering the area.

In response to a Stomp query, a spokesman for Tampines Town Council said it has cleared the litter and notified the relevant authorities about "this daily occurrence".

This includes the Singapore Police Force for noise nuisance as well as the National Environment Agency for smoking and littering.

The town council has also filed a report through the OneService app on safe distancing.

The spokesman added: "We want to take this opportunity to remind the public to adhere to the circuit breaker measures and to practise consideration towards their neighbours.

"The public can report cases where safe distancing is not observed via the OneService app and the information provided will help the relevant agencies know where the 'hotspots' are that require further enforcement and patrolling action.

"We will continue to work closely with the relevant authorities on this closely."

This is not the first time youths have been caught gathering in Tampines.

In a separate incident last month, a group of youths were caught on camera fleeing after Stomper Anonymous caught them gathering and drinking at a block in Tampines.