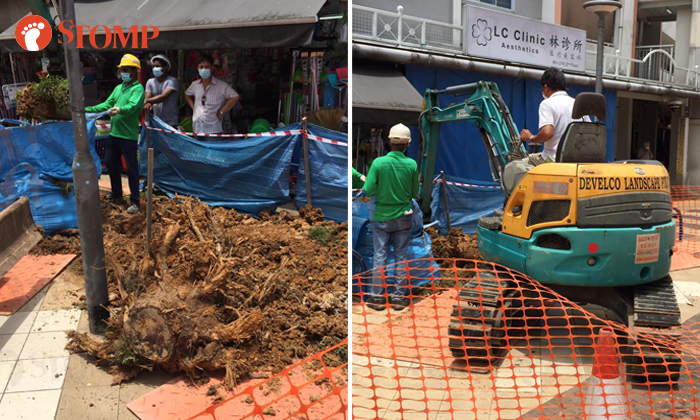 A resident was saddened to see several trees near Clementi 448 Market & Food Centre being cut down, but this had to be done due to hygiene and health concerns.

Stomper S spotted workers cutting down the trees on September 12, at around 12.30pm.

S, who shared photos of the scene with Stomp, said: "About ten 40-year-old trees were chopped and uprooted. This is sad!"

In response to a Stomp query, Jurong-Clementi Town Council said it had received feedback about bird droppings posing hygiene and health concerns.

"This is especially for elderly residents who frequent the venue and use seating which is affected by bird droppings," said a spokesman.

"The matured trees are being replaced with a different species, which is expected to attract fewer birds."

Related Stories
Resident stumped to see trees cut down in Bukit Timah -- but they had to be removed for safety
Tree that fell on vehicles at Tampines carpark removed by town council
Tree falls across jogging path near Upp Peirce Reservoir: 'I would have been hit if I was 30s faster'
More About:
tree
nature