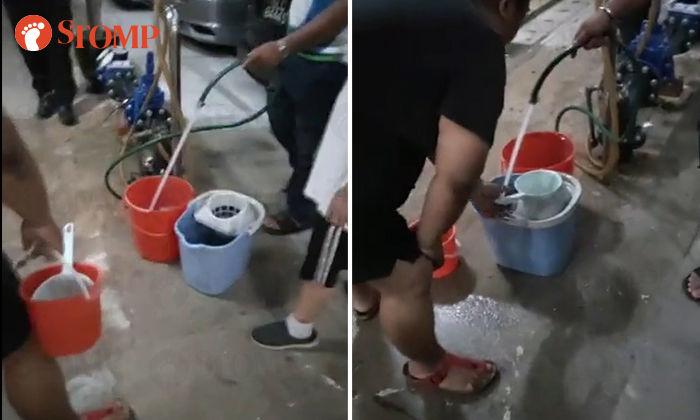 Tanjong Pagar Town Council has apologised to its residents after water supply to the 11th and 12th floors of Block 56 Lengkok Bahru was disrupted for 21 hours.

Stomper Rachel contributed a video where she had to collect water at a common tap.

Rachel told Stomp: "I reached home the day before (Sep 4) and my kids told me there was no water. They couldn't bathe after coming back from school.

"I asked my neighbours and they also said they didn't have water. I called town council at about 7pm and no one answered till about 11pm.

"I saw people bringing pails downstairs to level one to collect water. We only managed to bathe at 11pm.

"We had to bring our pails down. It was so inconvenient. The water still wasn't even back at about 7am yesterday (Sep 5).

"It was only at about 10am yesterday when someone called to tell me that the water supply is ok already and they said that it's due to blockage in an underground pipe."

In response to a Stomp query, a Tanjong Pagar Town Council spokesperson said: "Town council and PUB officers and contractors were on site yesterday (Sep 4) to investigate the water disruption.

"During the investigation, we identified the source of the blockage and removed a dislodged component in the piping system.

"Throughout this period, we opened up the common taps for our residents to use.

"We sincerely apologise to our residents for the inconvenience caused."