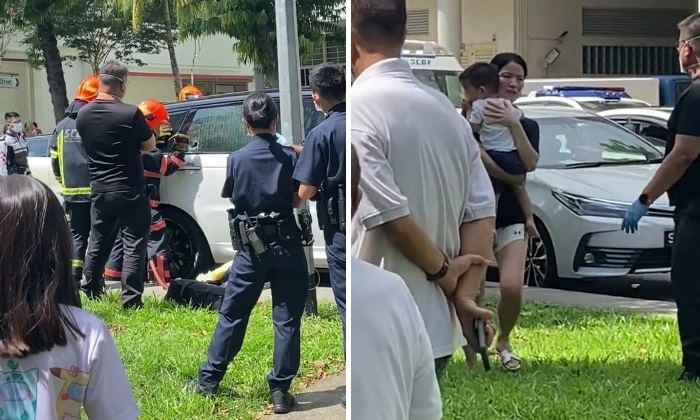 For nearly 30 minutes, the toddler cried as he awaited rescue in a stationary Land Rover under the sweltering sun on Sunday (June 5) morning.

Outside the car that was parked along Lim Liak Street in Tiong Bahru, officers from the Singapore Civil Defence Force (SCDF) worked quickly to rescue the boy, watched on by his anxious mother, their helper and curious bystanders, reported Shin Min Daily News.

The Chinese evening daily reported that it is believed the car door was accidentally locked with car key inside before either woman had a chance to take the child out.

In the first of two videos shared on TikTok by Quangphu194, an SCDF officer is seen tapping on the window of the right rear door with a tool, before finally managing to smash it and rescuing the trapped boy.

"The scene was very chaotic, and one of the women was shouting and panicking," a witness, who did not want to be named, told Shin Min.

Another witness, Ms Long, said: "The child was crying in the car and he continued to cry even after he was rescued."

A stall holder, Ms Zhang, told Shin Min that the boy's mother had dashed in the nearby market to seek help at first but no one really knew what to do.

She added that the mother later stood by the car, and shouted loudly through the window to try and calm her son.

SCDF confirmed that they received a call for help at about 11.40am and following the rescue, the child was examined by medical personnel, and was assessed to be fine.

In a second TikTok clip, the child is seen crying as his mother carries him away from the car.