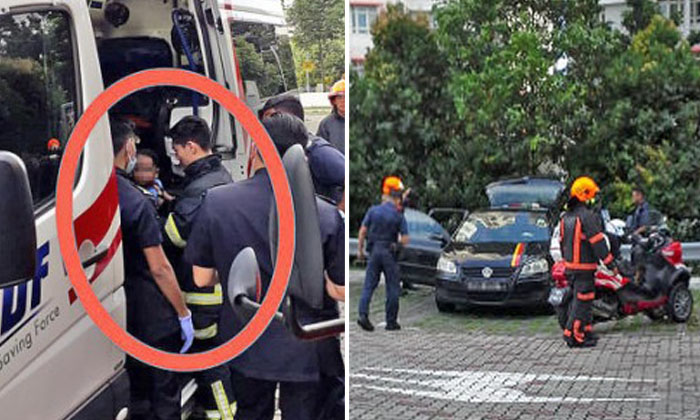 In order to free a toddler who was trapped in a car for half an hour yesterday (Jan 3), rescuers had to smash one of the car's windows.

The Singapore Civil Defence Force (SCDF) said it received a call to a rescue incident at Block 462 Sembawang Drive at around 9.10am.

According to The Straits Times, a 17-month-old toddler was trapped in the passenger seat of a car at an open-air carpark.

Shin Min Daily News reported that prior to SCDF's arrival, the child was trapped in the car for about half an hour.

It is understood by ST that one of the toddler's parents parked the car at the carpark and left the vehicle to take something from the boot of the car.

The parent had left the car keys on one of the car seats before exiting the vehicle.

The toddler had sat on the keys while the parent was outside, effectively locking the doors of the car.

When rescuers wanted to get the baby out, they had to distract him before shattering the glass window so he would not get hurt.

The SCDF said its officers eventually freed the child by breaking the car's window with a rescue tool. There were no reported injuries.

Related Stories
2-year-old boy who fell from 11th-floor Sengkang flat was possibly saved by his diapers
3-year-old boy injured after fare gate allegedly closes on him at Hougang MRT Station
Passers-by rush to help boy who got leg stuck in bicycle wheel at Woodlands
More About:
toddler
scdf
sembawang