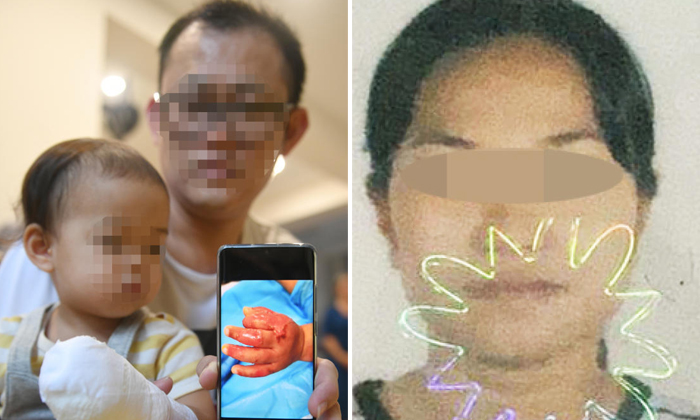 The eight-year-old sister of a toddler who was allegedly scalded by their maid is reportedly traumatised by the incident and blames herself for what happened.

Lin Lin Htwe, 30, was arrested on Jan 15 for voluntarily causing hurt by dangerous means after she was caught on camera dipping the 16-month-old toddler's hand into a pot of boiling meat.

The incident occurred at Block 992B Buangkok Link on Jan 14 when Lin was at home with her employer's two young daughters.

Lin, who initially brushed it off as an accident, later revealed that she hurt the child because she wanted to return home to Myanmar, said her employer Ms Amy Low.

The Ministry of Manpower (MOM) said on Wednesday (Jan 22) that it is aware of the incident, adding: "Police investigations are ongoing and MOM is investigating the employment agency for possible breach of the Employment Agencies Act."

According to Shin Min Daily News, the toddler suffered multiple injuries including:

Ms Low told Shin Min that the maid normally had a gentle and quiet demeanour, but was screaming and shouting on the day of the incident and acted like a completely different person.

However, she appeared calm when the police arrived.

Ms Low added: "When the police arrived, the maid was sitting alone in the room and reading a book. She did not seem panicked at all."

Ms Low's eight-year-old daughter was in the shower when she heard her sister's loud cries and rushed out of the toilet to check what had happened.

"I usually tell my eldest daughter to look after her younger sister and not to take a bath when the maid is cooking," said Ms Low.

"She is now traumatised by the incident and blames herself for her sister's injuries.

"Whenever we bring up the incident, she would cover her eyes and say, 'Don't talk about it anymore.'"

Browse the gallery for more photos.